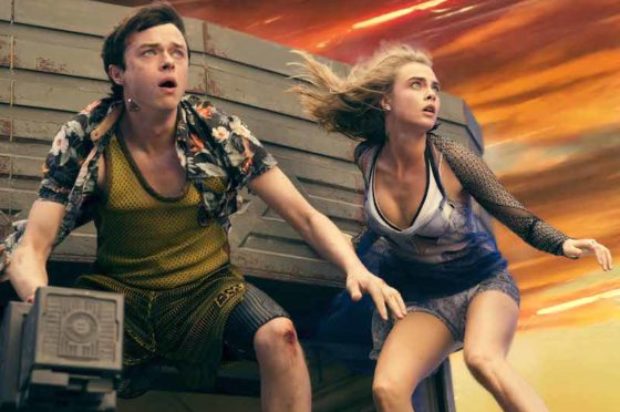 As far as immersive 3D cinematic worlds go, the pallet created in Luc Besson’s ‘Valerian and the City of a Thousand Planets’ gives the likes of ‘Avatar’ a run for its money. This is a beautiful, sumptuous creation – one that is made for the cinema screen – but grand visuals do not a good movie make, and as attractive as this is to look at, it isn’t able to overcome some of its glaring shortcomings.

The biggest problem being the casting of Dane DeHaan as titular space cowboy Valerian. DeHaan is a fine actor in his own right, and he excels when working with darker material (see ‘Chronicle’, ‘Kill Your Darlings’ or ‘A Cure For Wellness’) but the lighter, cheerier vibe his character adopts doesn’t suit his aesthetics; it’s as if they modelled his character in a similar fashion to that of Chris Pratt’s in ‘Guardians of the Galaxy’, intended to cast an actor of similar ilk, but ended up with the more modest DeHaan instead. Throughout the film’s overblown running time we are constantly reminded of his character’s supposed irresistible charm and bedroom prowess, yet even his silver-tongued game isn’t believable (one of the many problems evident in Besson’s script), which only adds to the frustration felt whilst watching as Valerian’s other (better) half, sergeant Laureline, proves a far more entertaining protagonist.

As played by model Cara Delevingne, Laureline is a strong, independent female who refuses to give in to inexplicable temptation by constantly rejecting Valerian’s advances. It’s made clear from their opening scene together that the two have a successful partnership as space-and-time travelling agents, but the romantic angle Valerian so desperately tries to force is completely lost on her (and rightfully so), and Delevingne feels far more at home in this elaborate world; it’s also rather telling that when the film splits the duo up, ‘Valerian’ is far more enjoyable when Laureline is the primary focus.

The plot-line itself is a bit of a convoluted mess, though it doesn’t need to be as the base story of space travel agents Valerian and Laureline uncovering a sinister plan to disrupt the peace contained within Alpha, an expanding metropolis consisting of a thousand planets, is relatively straightforward. Besson, however, has opted to throw everything but the kitchen sink here, and whilst some of the set-pieces are highly imaginative (one involving a virtual reality marketplace is really quite inventive) and Rihanna’s brief appearance as a shape-shifting alien is a real show-stopper, it doesn’t help clarify the character’s motivations.

Undoubtedly there will be those that will forgive the film for its downfalls (clunky dialogue, anti-climactic ending) and I certainly can’t personally deny its visual opulence, but at 137 minutes there needs to be some personality behind the beauty, and ultimately the alluring Delevingne can only carry DeHaan’s vehicle so far.