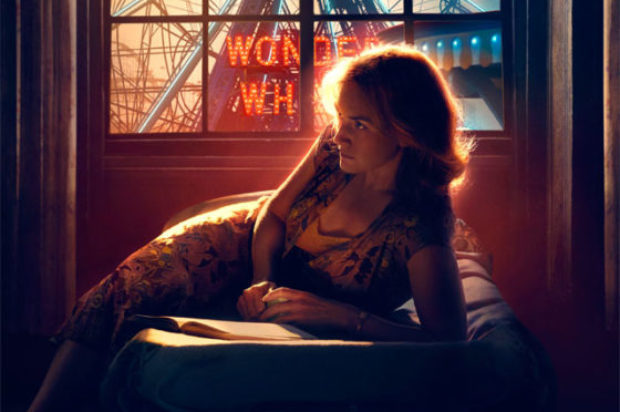 Despite the lush colours of the 1950’s Coney Island setting that act as its backdrop, ‘Wonder Wheel’ is a decidedly dark feature from Woody Allen (his 48th as director) where his lead characters are somewhat bitter and flawed, lending a certain harrow-ness to the overall tale that acts as his darkest material since his 2007 thriller ‘Cassandra’s Dream’.

The story itself is really nothing overtly exciting, but the way Allen films it and the performances he rouses from his cast maintain interest, with Kate Winslet turning in one of her most powerful performances in years as an unhappy wife desperate to shake up her mundane existence. Similar to the scene-stealing power wielded by Cate Blanchett in Allen’s ‘Blue Jasmine’, Winslet commands the screen, daring to make herself unlikeable in the process as a vain and selfish woman whose dreams of acting in her youth have fallen by the wayside through her own self-destructive behaviour.

Admitting to her own flaws though, Winslet’s Ginny has resigned herself to a life as a lowly seaside waitress beside her carny husband Humpty (Jim Belushi), a recovering alcoholic who she appears to appreciate more than loves wholeheartedly. Bored with her daily routine, some much needed drama enters Ginny’s life when she least expects it – one aspect welcome, the other less-so; Justin Timberlake’s flirty lifeguard Mickey proving the former, Juno Temple’s on-the-run Carolina the latter.

Filmed in a crisp sunny light that only magnifies his movie-star handsomeness, Timberlake has perhaps never looked this aesthetically classic, and he once again shows his ease as a cinema player in a role that slightly channels Allen’s own neurosis. Dramatic as he is though, Timberlake’s Mickey is nonetheless a heartbreaker-in-waiting, and he gives in almost instantly to his attraction to Ginny; even when she admits to being married, he continues on with their affair with little regard to Humpty.

Then there’s Carolina. A revelatory Temple simply glows as arguably the sweetest character in rotation here, a wife on the run from her mobster husband who also happens to be Humpty’s long-absent daughter. Though the film paints her as a little unreliable and clumsy, her kind-nature shines through, and it is certainly the grandest showcase Temple has been afforded to prove her worth as a reliable talent on screen.

As impressive as the performances prove to be though, audiences unversed in Allen’s divisive ways (and perhaps even those familiar) may find ‘Wonder Wheel’ a little too reliant on script, with there being a distinct theatricality adopted here that may throw unsuspecting viewers off. The almost play-like mentality Allen has on display here is a visual treat however, with the small apartment Ginny and Humpty reside in with her pyromaniac son earning camera weaves to and fro throughout the film’s unnatural set-up.

With almost 50 directorial features to his name, it’s understandable that Allen has a mixed bag of titles under his belt that assists the consensus that he’s a filmmaker of acquired taste. For every great film he makes, there’s one that’s horrible, but as of late he tends to dabble in mediocrity, and ‘Wonder Wheel’, far from his strongest work, falls in the middle somewhere as a perfectly serviceable drama of sorts that is elevated by its casting.