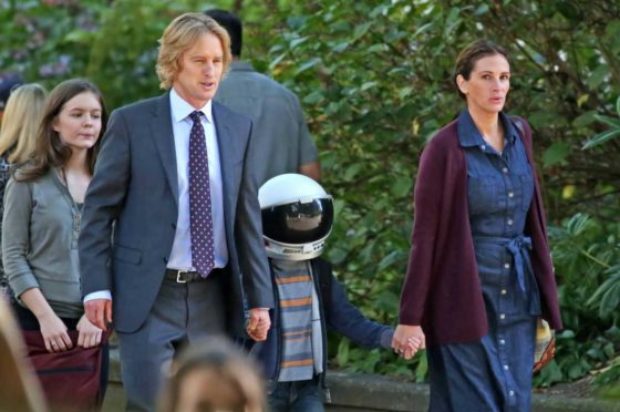 As easy as it would’ve been for writer/director Stephen Chbosky (‘The Perks of Being a Wallflower’) to nail ‘Wonder’‘s sentimental subtext into the ground – those grand old morality notes like “beauty is only skin deep” and “never judge a book by its cover” are covered here nicely – there’s something alarmingly non-saccharine about the way this relevant tale presents itself.

Born with severe facial deformities, August “Auggie” Pullman (Jacob Tremblay, the wonder kid of ‘Room’) has survived the majority of his life being sheltered from the world. His mother Isabel (Julia Roberts, overly maternal but thankfully more subdued than usual) has homeschooled him at the expense of her own career, his older sister (Izabeka Vidovic) has been his biggest champion despite her own insecurities on how important she feels to the family, and his father (Owen Wilson)…well he’s one of the few “cool” dads Chbosky’s script doesn’t saddle with some sort of personal crisis to overcome now that Auggie is being enrolled in public school for the first time.

The cruelness of kids and the harsh reality of schoolyard bullying are the first two major themes ‘Wonder’ saddles Auggie’s new lifestyle with as he bravely faces a new world, out in the open for all eyes on his unusual face to see. The film doesn’t want Auggie to be defeated, nor to condone the actions of his peers, but it displays an understanding of the mindset of the younger generation (and, in one scene, that of ill-informed parents) as to why they would treat him the way they do. Thankfully though, ‘Wonder’, as its name would suggest, overpowers the negativity with heart and pluck, and never in a way that feels overtly emotionally manipulative.

As much as this is Auggie’s story, and gives Tremblay the chance to transcend his facial prosthetics with a captivating performance, ‘Wonder’ beautifully juggles its timeline with mini-chapters focusing on a trio of other characters who have all seen their life drastically altered by Auggie’s presence. His aforementioned sister learns to step out of his shadow, his best friend (Noah Jupe) faces his own humility, and the seemingly throwaway character of Miranda (Danielle Rose Russell), Auggie’s sister’s best friend, highlights the sad reality behind keeping up appearances at the expense of one’s own happiness. It’s a neat structural ploy that hits home that outsiders are never truly alone looking in on those that supposedly have it all.

A conventional story at its core, but one heavy on heart all the same, ‘Wonder’ utilises its assets and winds up being a far stronger film than one may be expecting. A rarity in that it’s a family film that will likely open discussions instead of talking down to them with sickly sentiment, ‘Wonder’ proves compelling counter-programming for both the larger Hollywood fare doing the rounds and the Oscar contenders soon to be making their appearance known.