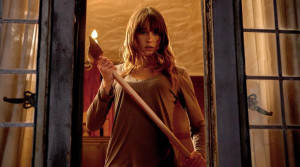 Having been shelved from general distribution for the last two years, ‘You’re Next’ finally unleashes itself on an unsuspecting public this week, and what a deliciously little evil surprise it is.  The home invasion sub-category of the horror genre has certainly seen its fair share of entries over the last few years and though initially it may appear that director Adam Wingard and writer Simon Barrett are playing to the conventions, it soon becomes quite apparent that with a healthy coating of blood and their tongues planted firmly within their cheeks ‘You’re Next’ is easily distanced from its contemporaries.

The premise isn’t anything we haven’t seen before – the 2008 thriller ‘The Strangers’ dealt with a near identical set-up – but the arthouse-come-exploitation angle Wingard has adopted gives the film its own distinct personality, not to mention the morbid sense of humour it underlays its nastiness with as in the blink of an eye we go from experiencing genuinely terrifying images to giggling at the sight gags created for our own amusement.  Don’t be fooled though, ‘You’re Next’ is a horror film through and through but it makes sure that when you want to laugh it’s with the film not at it.

After an opening sequence that bumps off two insignificant characters (something that has almost become a staple in the horror genre), we’re introduced to English teacher Crispian (AJ Bowen) and his former-student-turned-girlfriend Erin (Australian talent Sharni Vinson, ever so charmingly keeping her natural tone) as they travel to the secluded suburban estate of his parents on the eve of their 35th wedding anniversary.  The combination of wealth and dysfunction signal an awkward family reunion, so it’s no surprise that the proposed celebratory dinner of family matriarch Aubrey (1980’s scream queen Barbara Crampton) and husband Paul (Rob Moran) is laced with tension, stubborn silence and bitter arguments as we get glimpses into the clashing personalities of Crispian’s condescending older brother Drake (Joe Swansberg), introverted younger sibling Felix (Nicholas Tucci), and “princess” like sister Aimee (Amy Seimetz).  To make the evening more colourful Felix’s Goth girlfriend Zee (Wendy Glenn) and Aimee’s ‘director’ boyfriend Tariq (Ti West) are in tow.

As we can expect the night isn’t going to go as planned as no more than 5 minutes into dinner one of the guests is offed and chaos immediately ensues, leading the bickering family to unwillingly ban together as they figure out how to evade the trio of armed masked men that surround them.  There’s a precise reasoning as to why this family was chosen, but the question of who and why seem secondary to the fact that these people are clearly evil, and there’s never a sense of safety bestowed upon any particular character, something Wingard and Barrett clearly revel in as they bloodily and brutally dispatch members of the family at any given moment.  The film is violent without question – machetes, crossbows, and kitchen appliances are all on the weapons list – but it’s complimented nicely by the sly sense of humour that slowly but surely creeps up on each macabre moment, with the last 30 minutes or so of the film particularly laced with dark amusement as the surprisingly resourceful Erin overwhelms the attackers with her unique skill set.

Whilst each cast member seems perfectly tuned to their on-screen persona, it’s a deliberate ploy from the filmmakers that we aren’t asked to identify with the victims on a deeper level, leading the character of Erin to truly reign supreme.  As this film’s “final girl”, Erin is truly lovable and thanks to Vinson’s audacious charm you cheer her on at every moment as she fights back.  Despite her less-than-intimidating frame, you never doubt Erin’s resilience or her sense that she knows exactly what she’s doing.  Vinson is a revelation in the role and I wouldn’t be surprised if the next scream queen has been found with her.

‘Halloween’ by way of ‘First Blood’ may be a fitting way to describe the brutal, survival actioner mentality ‘You’re Next’ embraces, but regardless of whatever sub-genre it assumes it’ll go down as one of 2013’s best horror outings.  It has the perfect mix of suspense, gore and laughs, with an ambition that far exceeds its low budget.  Be next to see ‘You’re Next’.