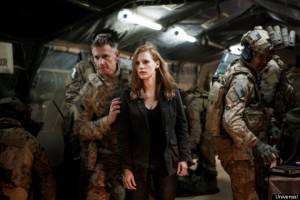 The search for Osama Bin Laden was a manhunt that occupied public interest for the good part of a decade, and under the careful direction of Kathryn Bigelow (‘The Hurt Locker’) the pursuit and ultimate termination of the man responsible for the September 11th attacks is told in an almost monotonous yet always detailed manner.  Sensationalising such an event, however disrespectful that approach may be, would seem like the easiest way to tackle such a story but thankfully Bigelow knew better creating an ethically complex tale rife with high tautness.

‘Zero Dark Thirty’ (a title which is never explained but is military code for 12:30am – the time that the raid takes place) begins with unnerving audio clips of the Twin Tower attacks from 2001 before fast forwarding a few years where we witness the particularly severe interrogation of an Al Qaeda member (played brilliantly by Reda Kateb) at the hands of the CIA.  The scenes involving these enhanced interrogations are distinctly uncomfortable to watch though they never feel exploitive with the film wisely not taking a side on whether or not torture is always the most effective method to extract information.  The early moments of the film concentrate largely on CIA analyst Maya (Jessica Chastain), rather fresh to this particular job, and Dan (Queensland actor Jason Clarke), a veteran of sorts when it comes to torture, as they explore various avenues in their attempt to get closer to Bin Laden, finding at every junction the name Abu Ahmed, a shadowy figure who is believed to act as a courier for Bin Laden.

As the movie progresses a series of terrorist attacks are detailed, including a devastating occurrence on a U.S. base in Afghanistan, which lead the numerous CIA superiors (including Kyle Chandler as the U.S. contact in Pakistan) to start doubting the search for Bin Laden as each hopeful lead only appears to make him all the more elusive, but Maya refuses to give in.  As a woman who devotes her every waking moment to finding this monster Chastain truly delivers.  We are offered very little on the character of Maya, at one point she is asked if she has any friends or a boyfriend and she can’t manage a definitive answer to either, and yet somehow, even without a background, she manages to be the most complex character of all.  This isn’t a character we can relate to in any way, but she manages to draw us in nonetheless with her delicate voice masking a strong and fearless woman who won’t be at peace until Bin Laden has been captured and killed.  It’s a performance that has rightfully won her accolades (and has her at the forefront to take home the Oscar for Best Actress) and is yet another reminder of why she is one of the most fascinating actresses working today.

The introduction of Edgar Ramirez as a military operative sends the film towards its unmatched finale as his character assists Maya in convincing the CIA that they have located Bin Laden in a compound in Pakistan, eventually sending in the Navy Seals to exercise a plan of attack.  This particular portion of the film is perhaps where ‘Zero Dark Thirty’ shines brightest as Bigelow demonstrates her finesse at applying tension as the Seals raid Bin Laden’s supposed compound with no score for accompaniment and the entire sequence filmed almost entirely through night vision essentially putting us in the raid itself.  Running at almost 25 minutes (a time I believe is only a few minutes of the actual assault the real-life SEALs experienced) it’s a risky tactic to devote such a large time block to one consistent sequence but once you witness it for yourself you’ll agree that there was really no other way to demonstrate what went on behind those walls.

Whilst not a traditional action film, there’s a masterful level of suspense created and though there’s perhaps a sense of lacking emotion throughout and its overall running time could be slightly trimmed, it’s a performance film through and through and really does begin and end with Chastain.  The aforementioned Kateb, Clarke and Chandler are all superb as is Jennifer Ehle as one of Maya’s closest co-workers and Joel Edgerton as the SEAL squadron leader, but Chastain is who you’ll ultimately walk away from the film remembering.  Disorientating at times, challenging at others and smartly crafted throughout ‘Zero Dark Thirty’ is another stellar piece of realistic cinema from Bigelow that deserves every inch of attention it finds.