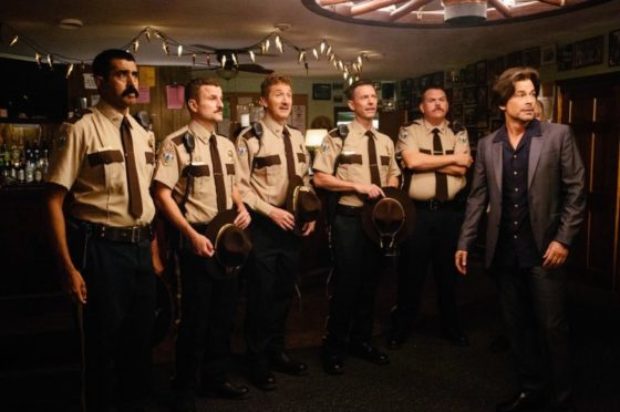 First and foremost it must be noted that ‘Super Troopers 2’ is indeed a film made for a particular audience. The original 2001 comedy came and went theatrically without much notice, but over the years it earned rightful cult status as its receptive audience came to appreciate its random, low brow humour. As successful as the film became (its minuscule budget essentially guaranteed it to turn a profit) a sequel was never guaranteed, and even though the rowdy lads behind it – the quintet collective known as Broken Lizard – delivered further productions that failed to match the success of ‘Super Troopers’, a re-visit seemed unlikely.

Thanks to a wildly successful Indiegogo campaign the band has finally gotten back together, and after 17 years it’s certainly a treat to watch a group of performers re-live their glory days without relying too much on previous material to coax them through; jokes are revisited and referenced throughout without ever feeling like a desperate attempt to recreate them.

After a celebrity ride-along incident that went horribly astray left them practically jobless (the incident itself referred to throughout, only receiving its glorious pay-off in the final credits), the titular Troopers learn their employment status may be about to change for the better when the Governor (Lynda Carter, ageing wonderfully for the record) informs them of a geographical crisis that needs solving. A recent reassessment of the U.S./Canada border has concluded that the town of St. Georges Du Laurent in Quebec is actually on American soil, so who better to replace the peace-keeping mounties than the antagonising Troopers desperate to get their jobs back?

It’s evident from the get-go that plot isn’t going to be an important factor in pushing ‘Super Troopers 2’ forward, much like the first film, and your enjoyment will very much depend on how often you laugh at the ridiculous shenanigans the troupe cook up for themselves. This is a particular kind of comedy that will be embraced by some and be deemed stupid by others (mainly those that haven’t seen the original or are unversed in the Broken Lizard brand of humour) and I completely understand the latter reaction, but it’s difficult to not label ‘Super Troopers 2’ a success, given that its objective is to make you laugh at the ludicrous – something they accomplish in spades.

The Broken Lizard boys themselves – Jay Chandrasekhar, Steve Lemme, Kevin Heffernan, Paul Soter, and Erik Stolhanske – all effortlessly slink back into their roles, ready to riff off one another like the original film only just happened, and Brian Cox (reprising his role as their short-fused superior) appears more game than ever, evidently having a grand time involving himself in plenty of bad taste gags. Of the new additions, it’s Rob Lowe who perhaps makes the largest impression as Quebec Mayor Guy Le Franc, the charming actor throwing any sense of self-consciousness to the wayside and barely flinching when involving himself in the film’s more raunchy set pieces; the manner in which he handles the genitals of a male prostitute is nearly worth the price of admission alone.

Despite something of a recycled premise and a few unsuccessful punchlines, ‘Super Troopers 2’ is mostly an enjoyably goofy, charmingly raunchy affair whose cast is clearly enjoying themselves. Fans will appreciate it, the general public are likely to reject it, but everyone should at least respect it as the creative minds here have made a film for their supporters without compromising their own personalities in the process.