Liam Neeson patrick wilson the commuter Vera Farmiga by Caroline Russo | on January 21, 2018 | 0 comments | in Film Release & Reviews | Like it 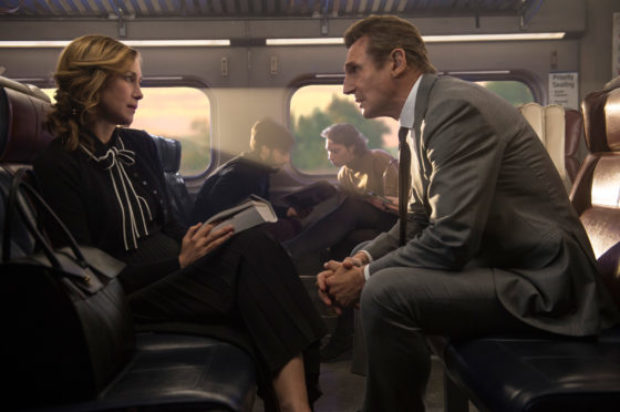 Given that audiences are so familiar with Liam Neeson playing the action hero nowadays, one has to be reminded that prior to 2008’s surprise success ‘Taken’ he was a formidable thespian to be reckoned with. Whilst his slew of action-centric features don’t exactly require a dedicated performance, it’s admirable on Neeson’s end that he remains as committed to the material as he does, and his latest effort ‘The Commuter’ is no exception.

Adopting a more Hitchcockian vibe for the majority of its running time, save for the last act which delivers on trailer-ready action money shots, ‘The Commuter’ focuses on 60 year-old Michael MacCauley (Neeson), a former police officer turned insurance salesman, who has been performing the same mundane routine of travelling to-and-from work via commuter train the last decade-or-so to appease his loving wife (a thankless role for Elizabeth McGovern) following his more fatal workload in the police force.

One day he is approached by a mysterious woman, she introduces herself as Joanna (Vera Farmiga), and their seemingly innocent, hypothetically based conversation becomes an all-too real dose of reality for Michael as he is ordered to locate a passenger on the train, and if he identifies them correctly a neat sum of $100,000 is his for the taking; Michael having recently lost his job and declining further in debt appears initially enticed despite Joanna’s vague instructions. Enticed as he may be, Michael doesn’t officially accept her offer but when she reveals that his wife and son are in danger, he has no choice but to play detective and narrow down the slew of faces on board the train he deems unfamiliar.

Much like fellow Neeson actioner ‘Non-Stop’, which was also helmed by reliable genre player Jaume Collet-Serra, ‘The Commuter’ is based nearly-entirely within its vehicular setting, and as implausible as much of the action that takes place is, the restrictions of the extended train carriage doesn’t stifle the creativity of Collet-Serra, Neeson or screenwriters Bryan Willinger, Philip de Blasi and Ryan Engle. The mystery surrounding Joanna’s need for Michael to find a particular passenger slowly unravels throughout the film, and though it all seems far more elaborate than it should, it never feels predictable.

‘The Commuter’ is pretty much what we have come to expect from Neeson at this point, and as much as we know he’s above this type of material, there’s such pleasure in seeing him believably owning the action persona in spite of his age. This is the kind of film you almost immediately forget about it once it’s over, but whilst you’re in the moment, this B-grade thriller is disposable fun that wears out its subtlety with glee and refuses to apologise for it.