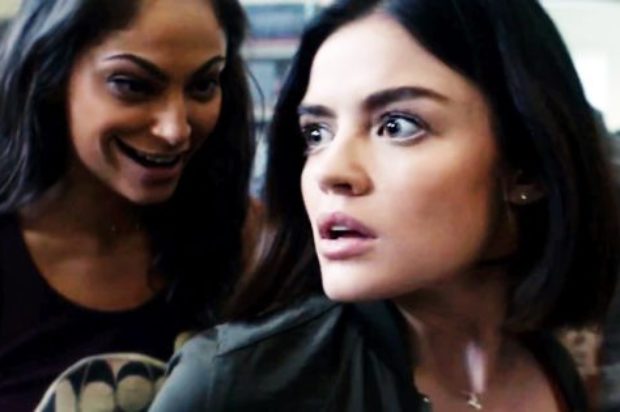 Before ‘Truth or Dare’ even begins, you know exactly what kind of movie you’re about to see. Hoping to be some sort of new-era ‘Final Destination’, but failing miserably in the process, ‘Truth or Dare’ follows every beat you expect it to, and it’s in this predictability that the film succeeds in being a massively entertaining ride for all the wrong reasons. I mean, people don’t set out to intentionally make a film that’s so bad it’s good, right?

In a bid to make us care about the bloodless carnage that will befall its lead pack of pretties, ‘Truth or Dare’ loads us up on a cute iPhone video montage over the opening credits detailing the spring break shenanigans of a group of college kids celebrating their final moments together before graduation. When “Final girl” archetype Olivia (Lucy Hale), who was initially planning a humanitarian mission as her spring break activity, meets lonely Carter (Landon Liboiron) in a bar in Mexico it all seems so innocently flirtatious when he invites her friends to an abandoned church to play a game of truth or dare; you’ve already lost a few braincells at this point, no?

The game seems like a fun idea at the time, and it’s all very typical in that the horny douche of the group dares two girls to kiss each other amongst their “revelations”, but once Carter drops a cliched horror truth bomb that he lured Olivia and her cohorts there to offload his curse onto them, M rated shit starts to get real! You see, now that our protagonists have played the game at Carter’s hand, they must keep playing or they’ll die; there’s also some nonsense sprouted off about not always choosing truth, which really just seems like a cheap ploy on the scriptwriting end as to not let them film be without a few (not-so) violent set-pieces.

‘Truth or Dare’ attempts to amp up the tension with its elaborate sequences revolving around the dares, but the nasty spirit of the film isn’t embraced wholeheartedly enough for it to be successful, instead leaving us tittering rather than terrified; ultimately, it’s quite difficult to be scared of a person asking us to play truth or dare with an exaggerated grin on their face, a facial ploy the film wants us to think is scary.

Though I wouldn’t dare anyone to see it, the truth of the matter is (see what I did there?) ‘Truth or Dare’ is a ludicrous film that serves up a heft of dumb fun, and depending on how you go along with it, you’ll either be incredibly insulted, alarmingly entertained, or a combination of both; i’m in the latter here as I was impressed at how stupid the film became whilst keeping my interest despite not giving two F*#%s about any of the players on screen. On that note though, ‘Truth or Dare’ at least serves up a decent-enough cast with Hale making for a charming lead, Hayden Szeto (the loveable Erwin Kim from ‘The Edge of Seventeen’) managing an impression despite under-characterisation, and Violett Beane overcoming the hoard of cliches thrown at her throughout (she’s fun, she’s slutty, she’s troubled, she’s loyal…oh the depth!) to deliver the film’s most committed performance.

For the crowds that don’t truly appreciate horror, i.e. those that think sludge like this is a true representation of the genre, ‘Truth or Dare’ is the type of film they deserve. For the rest of us who value both our time and the possibilities of greatness the genre can deliver (‘A Quiet Place’ says hello) this is one cinematic game best left unplayed.