Collection Focus: Modern Australia examines themes including
migration, popular culture, our colonial past, national identity, the
environment and our relationship to the land.

On show is Rosemary Laing’s burning Ayer #1, a photograph of a large
mound constructed from mass-produced furniture coated in red dust. The
form is suggestive of Uluru, formerly known as Ayers Rock.

Visitors will also see John Dahlsen’s four-panel depiction of the Gold
Coast from an aerial perspective, made from rubbish the artist found
walking along the beach.

‘We hope the exhibition will give Gallery visitors a new perspective
of history, art and Australia,’ said Assistant Curator Emma Collerton,
who curated the exhibition. ‘The artists featured are engaged in a
playful subversion of the past. These works tell stories that are
inclusive, diverse and ultimately very fulfilling.’

Collection Focus: Modern Australia showcases the work of artists
drawing from both personal and larger cultural narratives.
First-generation Australian Anne Zahalka, whose photograph The bathers
uses the iconic beach painting by Charles Meere for historical
context, acknowledges a multicultural Australia in her adaption.

Concerned by the lack of representation of Indigenous people in
nationalistic images of Australian art, Dianne Jones’ witty response
was to embed images of her family into Tom Roberts’ Shearing the Rams
painting. In so doing, she highlighted her family and Indigenous
involvement in the pastoral industry.

Michael Kempson and Matthew Tome’s screen-print The Right Hon. E.G.
Whitlam acknowledges the 21st Prime Minister of Australia and his
endorsement in 1973 of the purchase of Blue Poles by the American
abstract expressionist painter Jackson Pollock for the National
Gallery of Australia. The $1.3 million acquisition of the
masterpiece-which is alluded to in the print-caused uproar. Yet it was
an important statement by Whitlam that he believed in the cultural
welfare of the country.

Modern Australia is on display at Gold Coast City Gallery from 6 June
until 19 July. 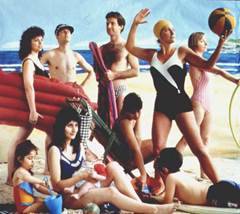 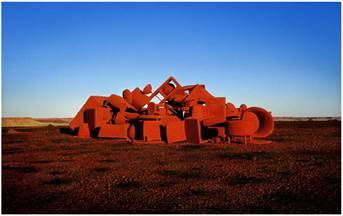 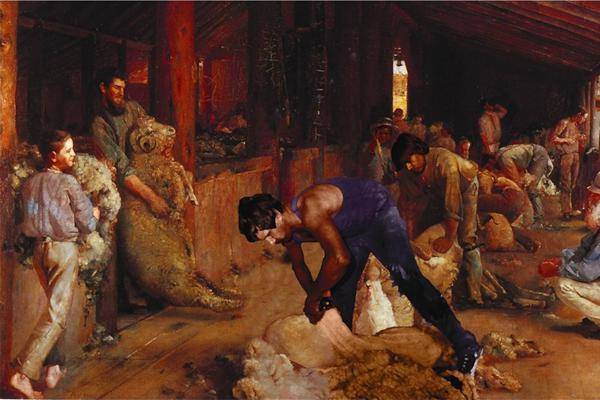 Dianne Jones, Shearing the Rams 2001, inkjet on canvas, Gift of
William Nuttall and Annette Reeves under the Cultural Gifts Program 2012