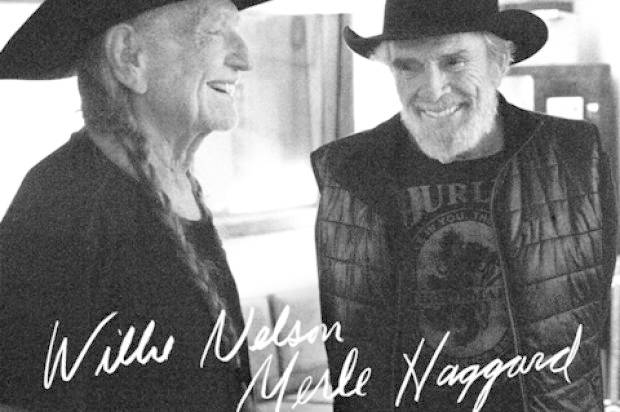 Sony Music Entertainment Australian is proud to announce DJANGO AND JIMMIE, the new studio album collaboration from Willie Nelson and Merle Haggard, two of the founding fathers of American outlaw country music, is set for release on Friday June 5th 2015.

“Me and Merle got a new album coming out called DJANGO AND JIMMIE and the title track is about Django Reinhardt and Jimmie Rodgers”, said Willie Nelson. “Both of those guys were very influential in both of our careers.”

According to Merle Haggard, there’s “new songs, a couple of classics and Willie sang like he was a teenager.”

For DJANGO AND JIMMIE, Willie Nelson’s sixth studio album release for Legacy Recordings since inking an historic deal with the label in 2012, the legendary singer-songwriter joined forces with longtime friend and collaborator Merle Haggard to reignite the musical chemistry that made the pair’s PANCHO & LEFTY a honky-tonk blockbuster and America’s #1 Country Album following its release in January 1983. Driven by a title track penned by Townes Van Zandt (and arguably the songwriter’s most familiar song), the critically-acclaimed top-selling PANCHO & LEFTY solidified the reputations of both Willie and Merle as among the most formidable and influential artists in outlaw country music while topping the US Billboard Country charts for seven non-consecutive weeks between April and October 1983.

The success of PANCHO & LEFTY opened the doors for a number of successful follow-up projects including 1987’s SEASHORES OF OLD MEXICO album, 2007’s double album LAST OF THE BREED with Ray Price, and the Merle Haggard-penned ‘A Horse Called Music’ (the lead track on 2012’s HEROES, Willie Nelson’s first album for Legacy).

A legendary country music producer and songwriter in his own right, Buddy helped pen five of the album’s tracks, including ‘It’s All Going To Pot’ (a rollicking anthem for the emerging 21st century cannabis culture) and four co-writes with Willie: ‘Alice In Hulaland’, ‘It’s Only Money’, ‘Where Dreams Come To Die’ and ‘Driving The Herd’.

Among the 14 essential recordings on DJANGO AND JIMMIE, Nelson and Haggard each pay musical tribute to the other through heartfelt solo performances: Willie singing Merle’s ‘Somewhere Between’ and Merle covering Willie’s ‘Family Bible’.

Willie sums up the duo’s new collaboration by simply saying, “It’s good music, I got a good feeling about it.”

With a six-decade career and a catalog of more than 200 albums to his credit, the iconic Texas singer-songwriter Willie Nelson has earned a permanent position in pop music’s pantheon with songs combining the sophistication of Tin Pan Alley with the rough-and-tumble grit and emotional honesty of country music. He brought pop and country together on the radio in the early 1960s with unforgettable songs like “Crazy” (Patsy Cline), “Hello Walls” (Faron Young), “Funny How Time Slips Away” (Billy Walker), “Night Life” (Ray Price) and others and, by the mid-1970s, had become a superstar in his own right as a prime mover of a revolutionary and thriving outlaw country music scene. THE RED HEADED STRANGER, Willie’s first album for Columbia Records in 1975, catapulted the artist to the front ranks of popularity, making his a name familiar in country and city households across America and around-the-world.

A seven-time Grammy Award winner, Willie Nelson has received numerous accolades including American Music Awards, Academy of Country Music Awards, Country Music Association Awards and others. He is a co-founder of Farm Aid, an annual series of fundraising events which began as an all-star benefit concert in 1985 to raise money for American family farmers. He continues to lobby against horse slaughter and produces his own blend of biodiesel fuel. An old-school road-dog troubadour with new school wheels, Willie plays concerts year-round, tirelessly touring on Honeysuckle Rose III (he rode his first two buses into the ground), taking his music and fans to places that are always worth the ride.

Willie Nelson, who is turning 82 on April 29, is an American original, a sublime singer, master tunesmith and outlaw country’s most enduring archetype.