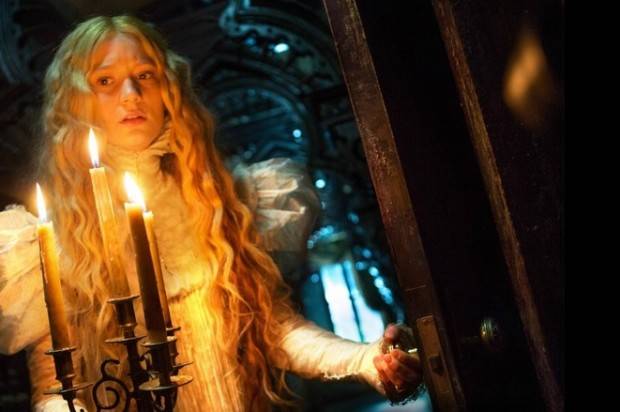 A decaying estate, an aristocratic family hiding some truly terrible secrets, and a game virgin with a penchant for sumptuous nightgowns and dark passages are just some of the ingredients that director Guillermo del Toro fuses together in this elaborately lush ghost story. Running rampant in a giant dollhouse where he happily homes scores of dying moths and mutilated ghosts, ‘Crimson Peak’ is surprisingly less a period ghost story and more a gothic romance; though it isn’t without its share of unsettling material, both visually and thematically.

Edith Cushing (Mia Wasikowska), an aspiring writer who fancies herself more Mary Shelley than Jane Austen, is finding the publication of her proposed manuscript a particularly difficult task given her insistence in its creation as a ghost tale; though to her it’s merely a tale that happens to have ghosts in it. Seemingly defying the confines of social stature, Edith’s unconventional manner is what draws in English nobleman Sir Thomas Sharpe (Tom Hiddleston) who has come to New York seeking finance for his mining equipment from self-made magnate Carter Cushing (Jim Beaver), Edith’s father. As he rejects the hoard of pampered bachelorettes trotted out before him, Thomas makes it his duty to sweep Edith off her feet, much to the disapproval of her father, Thomas’ perennially scowling sister Lucille (Jessica Chastain), and Edith’s long-time friend Dr. Alan McMichael (Charlie Hunnam). This is a love that can’t be swayed and it isn’t long before Thomas, Edith and Lucille are setting up to play (not-so) happy family in the Sharpe’s grand home, Allerdale Hall.

It’s in this sprawling estate where del Toro’s film really comes alive, and the rich detail offered to this new surrounding is so graphic in its palette and symbolism that you imagine had the film been presented in black and white it would still seep of the screen in a wealth of colour. Stretching his modest budget as far as he could – the film appears more luxurious than what was afforded – del Toro’s meticulous attention to detail is nothing short of astounding with Allerdale Hall defining itself so vividly with its own personality, it ultimately becomes the film’s biggest star. Its dulled green walls indicate its overgrown ruin; its contorted architecture so erratically created that rooms and corridors become entangled with one another; the roof defeated by rot so much so that deceased forestry (and eventual snow fall) coat the ground of the foyer. And then there’s the blood-red clay that Thomas mines from beneath the property which has begun to seep into every aspect of the land, the house appearing to be bleeding from its endless fractures.

The house is perfect fodder for a haunting tale like ‘Crimson Peak’, and del Toro makes sure to line every inch with a sense of slow dread that he builds so masterfully to strained tension. The film isn’t without its share of scares though, and thankfully the director has opted out of cheap jump thrills (for the most part), leaving the initial imagery of the ghosts to sit with you long enough to make you squirm in your seat before ultimately revealing the mystery of the Sharpe estate as the truest horror element. It’s possible that the audience will have pieced together the puzzle before its reveal, but that doesn’t take anything away from the proceedings as the finale shifts so insanely into an unfathomable heap of brutality, I suspect it will catch many a viewer off-guard.

Just as del Toro has contrasted his visuals with delicate beauty against savage violence, so too he has with his casting. Mia Wasikowska’s Edith is the epitome of light and verity to Jessica Chastain’s vile and unpredictable Lucille who is at once a fearless matron, bitter sibling, and callous overseer. The men share similar opposing qualities with Tom Hiddleston, in a role originally set for Benedict Cumberbatch, injecting his seemingly sinister role with an expected air of charm against Charlie Hunnam’s all-too-clean doctor whose vanilla persona is made all the more apparent by the violence that surrounds him.

I suspect ‘Crimson Peak’ will catch cinema goers unaware as its straightforward ghost-story marketing hook is far from what will actually be bestowed on the screen. Much like Edith’s own tale where ghosts are merely a component of the overall product, ‘Crimson Peak’ is a glorious gothic soap opera with a theatrical mentality, a heightened personality, and a violent spirit it unashamedly flaunts to no end.