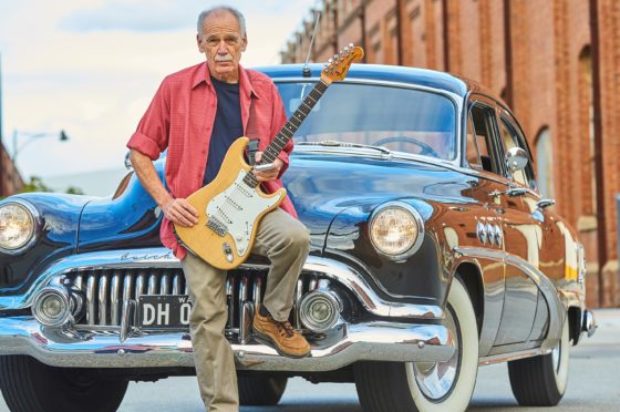 Dave Hole’s new album, GOIN’ BACK DOWN, has been a long time coming. “It’s taken 3 years of my life”, says the internationally acclaimed 69 year old Australian bluesman “but it’s been worth it. This is the one I’ve wanted to make for what seems like forever – an album where I could have the luxury of writing and developing the songs at a leisurely pace without the pressure of a fixed release date.”

Having taken the decision to self-produce and engineer, Hole had a lot to learn but found the process exhilarating. Three tracks feature accompanying musicians (Bob Patient, Rick Eastman, Roy Martinez, Paul Millard and Jon Tooby) but the remaining eight cuts have Dave playing everything himself, with the occasional use of loops and samples. This is not the first self-produced Dave Hole album but is it the first that he has engineered? “Well yes. Three tracks were recorded by Bob Patient at Anarchy but I recorded the rest of them and mixed them down in my home studio. It’s been a huge learning curve getting to grips with Pro Tools and all that stuff but it’s very satisfying to have done so much of the work myself.”

The result is a quite different and more varied collection of songs than what might be considered usual for a Dave Hole album. The ballad Tears For No Reason for instance, features nylon stringed classical guitar while Arrows In The Dark reveals a distinctly ‘60’s Merseyside influence – a side of Dave Hole we’ve not heard before. That said, there’s still a substantial helping of Hole’s signature high-octane slide guitar on offer – Goin’ Back Down promises to have broad appeal to both new listeners and Hole’s many existing fans alike.

“Too Little, Too Late was in my head almost fully formed when I woke up one morning. It’s about those irreversible tipping points in life. It could be in a relationship or whatever, or to do with climate change. It’s the point where you realize that there’s no going back.”
“I’ve always been a huge BB King fan and Used To Be seemed to demand that bluesy call and response thing that BB did so well and where the guitar just takes up the singing during the solos. So I abandoned the slide for that one and picked up my standard tuned Gibson 345 and allowed myself to fantasize that I was the “King of the Blues” for six minutes!”

The first and last song that book-end the CD appear to be closely related. Hole reveals “they’re actually two halves of the same song. The first one, Stompin’ Ground contains all the vocals, and the last one, the title track, Goin’ Back Down, is the extended outro solo. It started off as an experiment but I came to really like the effect of having a ‘slight return’ at the end of the album.”

Measure Of A Man is a slow paced burner that features what sounds like a Dobro throughout. “Actually it’s my National Tricone on that track” explains Hole. “The intro lick is a Robert Johnson thing.” Could we be forgiven for thinking that it’s about a certain US President? “You might very well think that, but I couldn’t possibly say,” quips Hole.
“Arrows In The Dark was co-written with my friend Nic DiFalco. He came up with the chord progression and it reminded me of some of the stuff from the 60’s that I grew up listening to, so I put some Everly Brothers vocal harmonies on it. It’s probably the most radio-friendly thing that I’ve ever done. Lyrically it’s about someone wanting to rekindle a relationship and the other person saying “That was way back when and we’re both totally different people now……and also, let’s not forget that you were the one that pulled the pin.””
“These Blues Are Here To Stay was probably the most fun of anything to record. It’s just six minutes of rollicking blues….the perfect vehicle for lots of slide guitar solos. Right in my comfort zone. And Bobby’s Rock is another one – an instrumental blues shuffle that was a great excuse just to have fun with guitar.”

Dave Hole’s 10th album, GOIN’ BACK DOWN, will be released world-wide on April 27 on CD, LP and Digital. He will be playing a handful of Australian dates in May with band mates Rudy Miranda on drums and Ian Lees on bass. See below for full details.