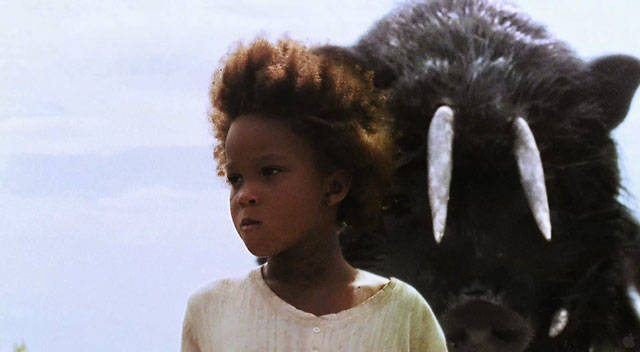 When first released in cinemas last September, despite unanimous critical acclaim, ‘Beasts of the Southern Wild’ was sadly overlooked; no A-list star to snare attention and its odd premise clearly wasn’t working in the films favour.  A real shame as it was truly one of the most original and majestic films no one saw.  With the recent announcement of its 4 Academy Award nominations (including Best Picture) a reinvigorated interest in the film can only be assumed.

Set in a remote stretch of the Louisiana bayou known as ‘The Bathtub’ the film is told through the eyes of Hushpuppy (Quvenzhane Willis), a six-year old girl living a life far beyond her years as she looks out for her father Wink (Dwight Henry) whose health is slowly starting to deteriorate.  Unprotected by the New Orleans levee system, the habitants of The Bathtub dart around in haphazardly created boats and believe the melting polar ice caps will submerge their homes – leaving only the strong to survive.  When the first clap of thunder is heard by Hushpuppy she believes it is the glaciers in Antarctica surrendering to nature and it isn’t long before the fears of the community are realised and their town goes under.  Though it is never mentioned by name, the storm appears to be Hurricane Katrina, and as Hushpuppy and her father had little time to prepare, they are faced with their fate at an unexpected pace.

Whilst ‘Beasts…’ is a particularly bleak tale, it’s an oddly beautiful one all the same.  At times we are never truly sure of what is real and what is fantasy as Hushpuppy is showcasing her unique reality through her perspective (often bringing to mind ‘Where the Wild Things Are’) but whatever your view on her world is it’s undeniable on how deeply moving and effective it is.  The relationship between Hushpuppy and Wink isn’t conventional, and at times it’s quite hard to watch Wink treat his daughter as if she were older, but the loving bond between the two is never weakened and the power of a father/daughter relationship is ultimately what reigns supreme.

Made on such a little budget it’s evident this clearly is a labour of love for writer/director Benh Zeitlin, making his feature debut following his short ‘Glory at Sea’ which also used New Orleans as its backdrop, as everyone involved here are locals to the area with not one professional actor involved.  Though the handheld camera style may irk some viewers and the magic realism the film grounds itself in may not be to all viewers taste, you’ll certainly emerge out of this touching film amazed at young Quvenzhane Willis, rightfully nominated for Best Actress at this year’s Oscars.  At such a young age, and with no prior acting experience, she has all the makings of not only a child star but a full-fledged professional delivering a performance that’s emotionally charged, whimsical and, above all, honest.  Much like the film itself.