ELTON JOHN & HIS BAND RETURN TO AUSTRALIA “ALL THE HITS TOUR”

Concerts elton john Elton John and his Band LIVE MUSIC Music by Caroline Russo | on May 3, 2015 | 0 comments | in Concerts | Like it 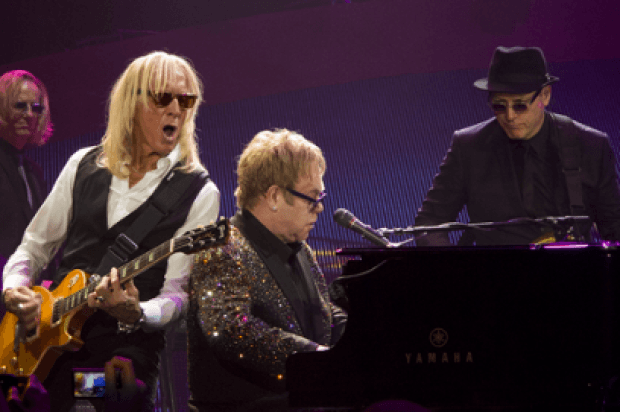 ELTON JOHN & HIS BAND RETURN TO AUSTRALIA
“All The Hits Tour” – from 5 December
Tickets for all shows on sale on Monday 11 May, 10am

“Elton played and sang awesomely, with gale-force gusto. Lord knows how many times he’s performed these songs, but somehow he still manages to sound as if he means every word of them.” – The Telegraph UK

Sir Elton John and his band return to Australia from 5 December as part of his international “All The Hits Tour.” And for the first time outside North America, audiences will see the beautiful 12m wide Chandelier, created by acclaimed Set Designer Mark Fisher, that is the centrepiece for Elton’s stage.

Elton John first performed in Australia on 17 October, 1971 at Subiaco Oval, Perth. Having played 179 concerts across the country to in excess of 1.5 million people, Elton John makes a triumphant return to the country that has welcomed him for many years. As part of this tour Elton John will play at the Qantas Credit Union Arena (formerly Sydney Entertainment Centre) on 19 December which will be the final concert in that arena prior to its scheduled closure. Elton has set a house record for performing in that venue with 45 shows to in excess of 475,000 people.

Elton John said, “Australia has been one of my favourite countries to tour in ever since my first visit there at the start of my world-wide career in 1971 (it is incredible to think that my drummer on that tour, Nigel Olsson, is still with me today). Some of my most memorable concerts have taken place in venues all across the continent. The Australian audiences always seem to bring out the best in us, and I am certain there will be many more fantastic evenings when we visit in December.”

Elton John’s band includes Nigel Olsson on drums, part of Elton’s original three-piece band, as well as musical director Davey Johnstone (who first recorded with Elton in 1971 and joined the band in a year later) on guitar, Matt Bissonette on bass, John Mahon on percussion, and Kim Bullard on keyboards.

Undeniably one of the most acclaimed and adored artists of all time, Elton’s spectacular stage shows are sought after by audiences worldwide. Since his career began in 1969 Elton has played more than 3,500 concerts in over 80 countries.

Elton is one of the top-selling solo artists of all time, with 37 gold and 27 multi-platinum albums as well as 58 Billboard Top 40 singles in the United States, and he has sold more than 250 million records worldwide. Elton holds the record for the biggest-selling single of all time, Candle in the Wind 1997, which sold 33 million copies.

He has also written the music for stage and screen successes Billy Elliot: The Musical, Elton John and Tim Rice’s Aida, and The Lion King, which was recently named the highest-grossing stage show or film release in the world.

Among the many awards and honours bestowed upon him are five Grammys, a Grammy Legend award, a Tony and an Oscar, a Best British Male Artist BRIT Award, induction into the Rock and Roll Hall of Fame and the Songwriters Hall of Fame, the Kennedy Center Honor, Legend of Live Award, 12 Ivor Novello Awards and a knighthood from HM Queen Elizabeth II for “services to music and charitable services.” Elton has recently been named the first recipient of the BRITs Icon Award, which recognises the very highest level of British music achievement, presented only to iconic artists whose writing, recording and performances set them apart as having made a lasting impact on the nation’s culture.

Don’t miss this rare opportunity to hear one of the world’s greatest pop musicians in spectacular form when Elton John returns to Australia this December.

TICKETS FOR ALL SHOWS ON SALE MONDAY 11 MAY at 10AM