FEAR THE SILENCE BY IAIN CAMERON 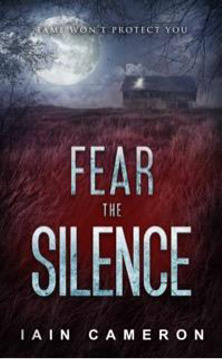 Fear the Silence: When a rich, successful woman disappears everyone’s
accusing eyes turn to her husband. But DI Henderson isn’t so sure…

The detective whose laconic nature belies a razor sharp ruthlessness,
DI Henderson returns in Fear the Silence – the third book in author
Iain Cameron’s popular detective series. This fast-paced crime
thriller finds our Sussex-based police hero on the hunt for two
individuals. One is a rich, successful businesswoman; the other is the
reason ‘Kelly’ is no longer around.

United Kingdom – When it comes to crime writing Iain Cameron has
created a detective just as memorable as the fictional Rebus of his
hero or the flawed police heroes of other leading crime writers. A
character you can’t help liking and rooting for, Scot DI Henderson
deserves a break. Will Cameron give it to him?

DI Henderson’s focus right now is drug shipments – big ones with the
gall to land on his patch at Shoreham Harbour. But it’s fine; he’s
about to have those gangsters behind bars any day now.

Or at least he was. Now Kelly Langton has become the priority. The
former glamour model and now smart local businesswoman has done a
sinister disappearing act. The press are clamouring to know what’s
happened to Sussex’s answer to Victoria Beckham. You can’t walk around
town without seeing evidence of her brand thanks to that clothing,
jewellery and perfume empire of hers.

The spotlight of blame lies firmly on her husband. A man who could do
with brushing up on his interpersonal skills, Mr Brian Langton is the
obvious candidate and the evidence seems to point that way too. DI
Henderson thinks otherwise though – especially when a second woman
disappears in what appears to be eerily similar circumstances.

Not only does he have to convince his superiors that they’ve got the
wrong man, he’s only too conscious of the sands of time slipping
through his fingers.

Fear the Silence is available on Amazon on July 1

A lover of the crime thriller genre, this is Iain Cameron’s third
novel in his detective series featuring DI Henderson, a series
inspired after reading a book by Scots crime writer Ian Rankin. He
hopes to go on and feature the Sussex-based detective in future books.

Formerly an accountant, management consultant and retailer, he now
writes full time at his home in Horsham, West Sussex. The author was
born and brought up in Scotland before moving to Brighton in his
twenties and later marrying. He has two daughters.