Fifty Shades of 50 A Really Reliable Memoir By Brendan Jones

Brendan Jones Fifty Shades of 50 MEMOIR New Holland Publishers by Caroline Russo | on November 16, 2017 | 0 comments | in Books | Like it 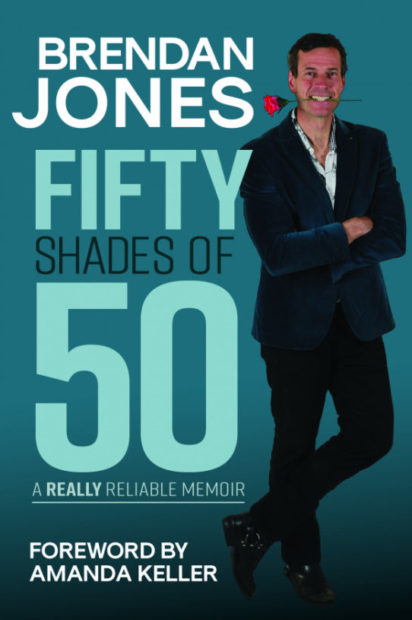 Written in the same quirky and irreverent style listeners know and love from his #1 Breakfast Show WSFM Jonesy and Amanda, this autobiography is the ‘secret diary’ every fan has been waiting for. Readers learn all about the life and times of Brendan ‘Jonesy’ Jones—from a suburban Sydney boy to becoming one of Australia’s greatest modern day radio icons.

His memoir takes fans back to his early radio days as ‘BJ the DJ’ at 6KA in WA, all the way to 2NM in Muswellbrook, i98FM in Wollongong and eventually to Triple M Brisbane where Jonesy
works alongside future media personalities including rival Kyle Sandilands.

While Jonesy’s style has always pushed boundaries, other ‘inside’ stories from the studio over the years are revealed, like a prank that lands Sandilands a girlfriend, an on-air call that goes wrong with Jimmy Barnes as well as his involvement in the controversial IVF rumour segment about Amanda Keller.

Jonesy talks about those unforgettable moments on the radio waves, including an impromptu interview with Sting, indulging in Guinness and Irish whiskey with U2 in Dublin, as well as late night calls and escapades with the late Angel’s front man and close friend Doc Neeson.

Beyond radio, Jonesy also shares his ventures in television, like performing on Dancing with the Stars, as well as how he turned down a co-host offer with Lisa Wilkinson on Chanel 7’s ‘The Morning Shift,’ and how he lost the role as host of The Bachelor to Osher (Andrew G).

Fast forward to recent years, Jonesy talks about fulfilling his childhood dream of working for Triple M Sydney. He also opens up about WSFM’s hot pursuit of having him join the station, making the life changing career move to their breakfast show, as well as how he got Amanda to eventually join the ARN team—and the rest is history.

Even with the highs and the lows, Jonesy’s story is a ‘feel good’ one at heart. Humorous and endearing, the twist and turns of this very reliable memoir reveal many more loveable chapters about one of Australia’s favourite radio announcers—including stories about his childhood friends and family, the fateful love story between he and his now wife Helen, the joys of parenthood, well as his passion for motorcycles and pursuit of happiness beyond the mic.