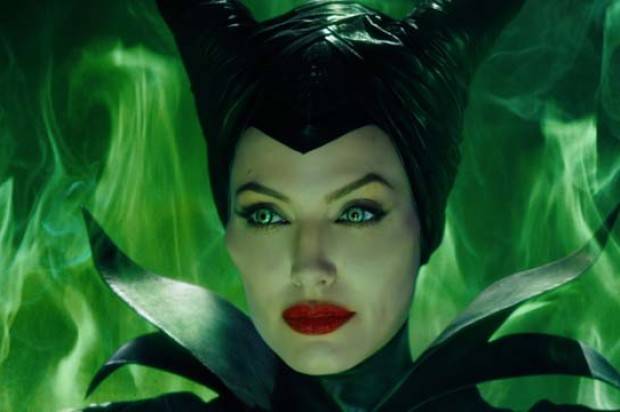 It’s hard to believe it’s been four years since we last saw Angelina Jolie on the big screen (the tepid 2010 thriller ‘The Tourist’ sitting as her most recent live action affair) and in the time waiting to see her as the titular ‘Maleficent’ we’ve been teased and taunted with imagery greatness, leading us to believe that the re-telling of ‘Sleeping Beauty’ would be well worth the wait. It can’t be denied that this film begins and ends with Jolie, she was practically born to play a wicked witch (I mean that in the nicest way possible) and she is so utterly alluring and effortlessly intoxicating that she devours the CGI world around her. Had the film allowed the character to be truly sinister, Jolie would be turning a classic Disney villainess into her own – alas that is not the case.

When the film begins we meet a young Maleficent (played by Isobelle Molloy), winged, kind and protector of the enchanted forest she calls home, who falls in love with peasant Stefan (Michael Higgins) after he stumbles into her homeland. A brief courtship takes place and as the two grow older, the further apart they become until eventually an adult Stefan (Sharlto Copley, seemingly unable to play subtle) returns with a vengeful spirit all in the name of the king whose throne he is so thirsty to claim as his own. In an act of loyalty Stefan cuts off the wings of Maleficent (Jolie), unaware of the consequences he, and his family, will face. At the ceremony to celebrate the birth of Stefan’s daughter Aurora, Maleficent, in the grandest of entrances (I dare you not to grin at Jolie’s wickedness here) curses the child to fall into a deathlike sleep upon her 16th birthday, sending Stefan mad and ordering his young daughter away to live in a secluded sector of the woods under the protection of a trio of fairies – Flittle (Lesley Manville), Knotgrass (Imelda Staunton) and Thistlewit (Juno Temple).

As Aurora grows (a spectacularly happy Elle Fanning plays her in her prime) Maleficent bides her time and unexpectedly becomes the girl’s guardian, which in turn softens her heart and naturally causes her to break her own curse. As to be expected this is easier said than done and when Aurora does succumb to the curse, the quest to find “true love’s kiss” begins. With the film promising to tell us the ‘Sleeping Beauty’ tale we’ve never heard before, Disney looked to have created something rather edgy and dark with ‘Maleficent’ but ultimately it still plays it safe, catering to the family and presenting a fantasy tale that’s heavy on parental love and female liberation. There’s nothing wrong with this tactic (‘Frozen’ touched on the same subject), and it would be too much to ask for the film to stay on a more menacing path, but in promising to showcase Maleficent as we’ve never known they’ve ended up transforming her into the most unlikely Disney heroine.

With her backstory shrouded in anger and sorrow, the film easily aligns us with Maleficent so the sense of dread we should feel has been softened, though again it’s not a fault of Jolie whose magnetic presence is the sole reason the film soars as high as it does. Director Robert Stromberg (a production designer on the similarly themed ‘Alice in Wonderland’ and ‘Oz the Great and Powerful’) is evidently capable of handling CG-heavy environments as nearly every frame is full of digital creatures and nature, and there can’t be denying how attractive the film looks but these colourful sequences again seem slightly offset as the classic Disney mentality keeps these scenes alive with the impossibly dumb trio of fairies before cutting to a mad King Stefan vowing death on Maleficent and ordering his army into battle. These darker arrangements promise a more mature-aimed tale that ultimately feels out of place amongst clumsy fairies and cute creatures.

‘Maleficent’ is by no means a bad movie though, more a misleading one, and at fewer than 100 minutes it gets the job done in a satisfactory pace. The climactic battle between Stefan and Maleficent is suitably exciting (there’s even a fire-breathing dragon for good measure) too and, despite its haunting melody and vocals courtesy of Lana del Ray, there’s a sense of giddiness in hearing the classic “Once Upon A Dream” play the credits out. ‘Maleficent’ may not be as magnificent as we would’ve hoped but Angelina Jolie sure is, and that’s more than enough to warrant a visit with this villain.