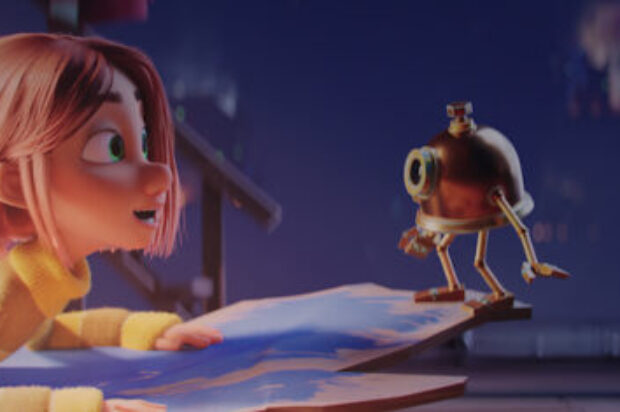 12-year-old Mina’s life is turned upside down as new bonus sister Jenny moves in. Jenny is a nuisance and Minna wants her out of her life! One night, Minna meets the Dreambuilders and discovers that she can change Jenny by changing her dreams. But changing dreams has major consequences. So, Minna has to save Jenny in the dream world to save her family in the real world.

The production of Dreambuilders started in 2014 as a fantasy tale in 2D aimed at a festival audience, about a girl who faces many obstacles and saves the world, but was changed in 2017 to a simple but much more touching and modern tale of a girl who tries to hold onto what she knows because, she doesn’t know that what she’s getting.

Kim Hagen Jensen director says that it was many years ago, on one night that he had a strange experience. I dreamt that I discovered an opening into a world behind our dreams. A world where workers and construction teams worked diligently to create dreams for all people. The experience seemed incredibly real to me even though it was obviously absurd.

That gave me the idea for the Dreambuilders universe and a story began to emerge. My ambition was to create a compelling and touching story that address real issues in children’s lives and make them reflect on the nature of dreams without being too heavy handed or burdened by long explanations. Over the years this idea went through many iterations I finally found the story I wanted to tell.

JENSEN has worked as an animator since the 1980s. Kim Hagen Jensen had the role of VFX Supervisor on “Help! I am a fish ”(2000) and“ Asterix and the Vikings ”(2006) and have also directed a number of animated short films including. “Will-Bot – Friend or Foe” (2011) and “Crashlanded” (2014). He has made a storyboard on films such as “Hugo 3 – naughty, flabby and free” (2007), the Robert nominated animated film “Disco Worms” (2008), “Olsen The Band on Deep Water” (2013), and“ The incredible story of the giant pear ”(2017). Kim Hagen Jensen has also been part of the advisory table at The Animation Workshop in Viborg. Dreambuilders is his first feature film.

Jensen adds that it is important for the story that the dreams feel vivid and magical.  When we are backstage, the creation of the dreams feel very mechanical. To get this point across the dream universe is designed in a steampunk inspired style, with lots of small Dreambuilder robots creating impossible illusions. To enhance the shifts between between the dream world and the real world, the design of the real world points towards the Danish cosyness “hygge” and the feeling of home.