film release Kristen Stewart by Caroline Russo | on November 29, 2020 | 0 comments | in Film Release & Reviews | Like it 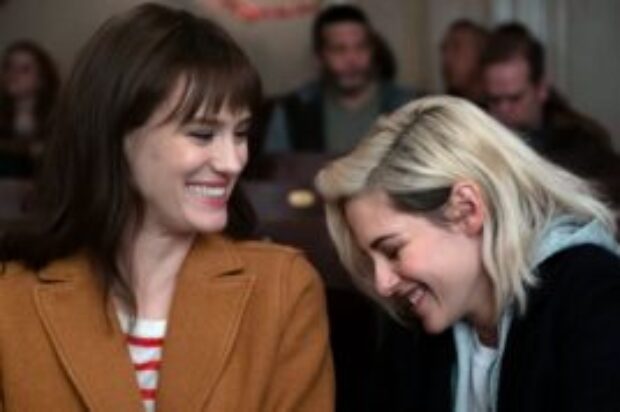 Meeting your girlfriend’s family for the first time can be tough. Planning to propose at her family’s annual Christmas dinner – until you realize that they don’t even know she’s gay – is even harder. When Abby (Kristen Stewart) learns that Harper (Mackenzie Davis) has kept their relationship a secret from her family, she begins to question the girlfriend she thought she knew. Happiest Season is a holiday romantic comedy that hilariously captures the range of emotions tied to wanting your family’s acceptance, being true to yourself, and trying not to ruin Christmas.

Story by Clea DuVall in which Happiest Season represents a combination of her sensibilities as a writer- director – a positive, optimistic, heartwarming film, a celebration all of the tropes that make holiday movies a sheer joy, told in a way that audiences have never seen before. “I wanted to make a by-the-book, happy, bright, warm romantic comedy where you know that the end will not be bittersweet. There are a lot of LGBTQ films that are beautiful but skew more dramatic. The LGBTQ community deserves happy endings sometimes.”
In co-writing the movie with DuVall, Mary Holland attests that making a satisfying holiday movie was job one. “I think that holiday movies are really significant to us,” says Holland, who also co-stars in the film. “They’re a big part of our childhoods, and a big part of how we experience the most wonderful time of the year, when we take stock of our lives, and are grateful for our family, either the one we’re born into or the one we find. I’m so excited that this is such an accessible holiday romantic comedy.”
“In Happiest Season, Clea and Mary have come up with a brilliant twist on the Christmas comedy that is laugh-out-loud funny and deeply moving,” says producer Marty Bowen. “It manages to be both timely and timeless in the best of ways and we think it’s a holiday classic in the making.”

As she continues as a filmmaker, DuVall says that audiences can expect more films that put new characters into familiar genres. “I gravitate toward universal stories,” she says. “What I love about watching film is connecting with the characters – even when I’m watching characters who are not like me, which is most of the time, there’s something about their story, their journey, that I connect with. As I filmmaker, I want to tell stories do have that universal quality, told through a more specific lens.”
“It was important to us to make a movie that was not only grounded in reality and the intense drama behind certain family dynamics, but one that is also light and fun and relatable,” says Kristen Stewart, who stars as Abby, half of the couple desperately trying to keep the secret. “Not every story told about same sex couples needs to be so dark and intense.”
“What’s wonderful about this movie is that we’re within a very familiar genre to tell a different story,” agrees Mackenzie Davis, who plays Harper, the other half of the couple. “When you watch a Christmas romantic comedy, you know everything’s gonna be okay in the end. You will go through troubles and it will be stressful, but everybody will end up where they need to be in a positive way.”