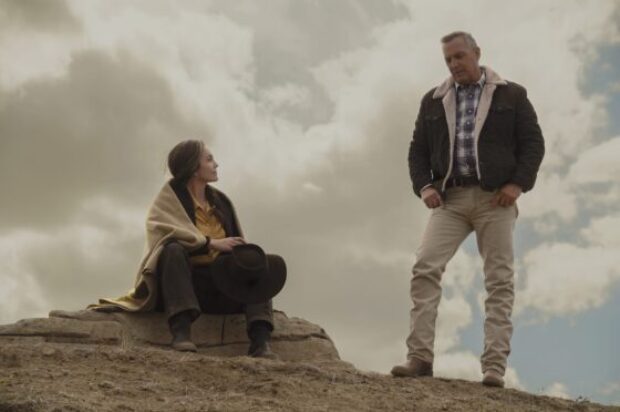 Written and directed by Thomas Bezucha.
Out now in cinemas.

“Let Him Go”, is an intense character-based thriller and is from writer-director Thomas Bezucha. Set in the American West the year is 1963 and retired sheriff George Blackledge (Kevin Costner) lives on a Montana ranch with his wife Margaret (Diane Lane), their adult son James (Ryan Bruce), his wife Lorna (Kayli Carter) and the couple’s newborn baby Jimmy. Their home is humble but happy, until one bright autumn morning when tragedy strikes—James dies of a broken neck when thrown from his horse. Three years later, his widow Lorna marries Donnie Weboy (Will Brittain), a young man with strong ties to his North Dakota clan. Margaret’s worst suspicions of Donnie’s dark side are confirmed on a visit to town, when she witnesses him strike both Lorna and her grandson.

This leads for Margaret is deeply alarmed when the newlyweds pull up stakes in the middle of the night, leaving town without saying goodbye. She resolves to track the couple down and to bring Jimmy home to live with her and George. Unable to dissuade headstrong Margaret from her mission, George reluctantly agrees to the journey and to help her rescue the boy—and Lorna. But the violent and controlling Weboys, headed by uncompromising matriarch Blanche Weboy(Lesley Manville), won’t allow the Blackledges to reclaim their loved ones. George and Margaret are left with no choice but to fight for their family, no matter how great the cost.

LET HIM GO found its footing quickly. Bezucha and producer Mazur had worked together on bringing The Guernsey Literary and Potato Peel Pie Society to the screen. Looking to repeat the collaboration, Mazur asked Bezucha if there were other projects on which they might partner. He shared his passion for Watson’s novel and explained his vision for a film based on the powerful story.

The casting of Diane Lane, an Academy Award® nominee for her performance in the 2002 drama Unfaithful, was the ideal choice. “She had such a clear idea of Margaret and Margaret’s state of mind,” Bezucha says. “Her range is incredible. She has, I think, an innate relatability and a decency that radiates off her. Margaret’s a woman of real strength and determination, and Diane’s a strong woman so it was great to see her lean into that.” 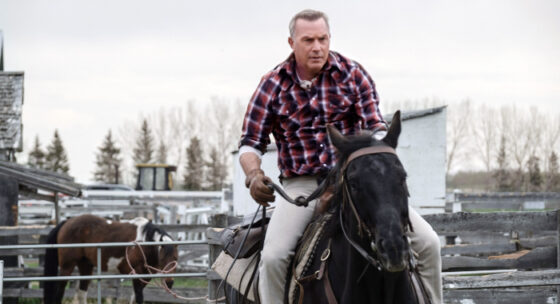 As for Kevin Costner he represents the best of Americana, and he has a Western feel to him. He loves the West. He lives that pretty actively in his own psyche, and I think it comes through—that chiseled face, that jawline and those incredible blue eyes, that directness. There’s a real direct quality about him, a knowing quality about him that felt very much like George.”
Costner was so impressed with Bezucha and his screenplay that he agreed to star in LET HIM GO: “I’ve worked on about two or three scripts in my life where we didn’t really change a word. There have been other ones where we worked sometimes right up to the night, and I don’t like doing that. But this was one that came in the vein of Bull Durham and Dances with Wolves and Silverado, movies that were crafted really well. The word was there.”

Costner has commented on that fact of working again with Lane— where they previously has been together on both Man of Steel and Batman v Superman: Dawn of Justice, playing Kansas couple Jonathan and Martha Kent, adoptive parents of Superman. “The piece of the puzzle that was so inviting to me was Diane already in it,” Costner says. “I always want to work with people under the right circumstances, and I thought this gave us a chance to be in a really good movie. So, Diane was the appeal, and Tom’s steady hand with me really was the thing that helped me to sign.”

Lane was equally delighted to work with Costner to shape George and Margaret’s relationship on screen. “Kevin brings a level of integrity to every role,” Lane says. “We want him to be a hero. He seems to be able to make sense of things wherever he is and whatever character he plays. He brings clarity to what’s going on. He certainly does with George. Kevin saw what was beautiful about this story, the simplicity and the truth of it, and it struck a chord with him.”

In picking the role of Blanche Weboy it was from the start, casting director Avy Kaufman felt that Lesley Manville, an accomplished veteran of the British stage and an Academy Award®-nominee for her performance opposite Daniel Day Lewis in Paul Thomas Anderson’s Phantom Thread, was the ideal candidate. Lane, for one, was delighted to work opposite a performer of Manville’s caliber. 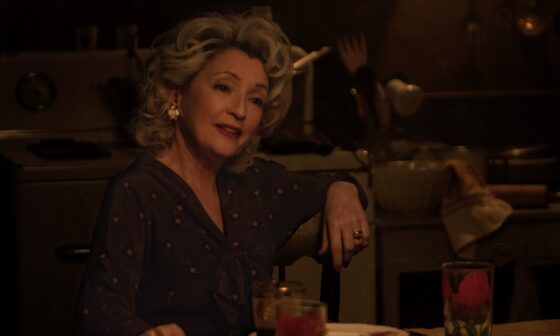 Offers Manville: “When I read it, it was just so amazing—a gripping thriller, apart from anything else. But there are Western elements in it. And then it goes into this dark, Gothic place with the Weboy family. I loved the language in it. I loved the language of Blanche. I just love the way she talks. You could equate it to an East End of London gangland momma with her slightly crooked family. I was flattered that Tom and Paula thought that a British actress could do this very extreme, eccentric, pretty crazy Midwest momma with a gun.”

“Diane and Kevin bring this really deep stoic power to their characters where Lesley and Jeffrey and the rest of us have that brutish Weboy side,” adds Mackay. “They are two groups of people who have very different views of the family but at the same time very similar. They will fight for their own, they will bleed for their own, and it’s devastating when they’re separated from their own.”

It is intense and dark but powerful storytelling of this kind.