Film Release SAVE YOUR LEGS

Brendan Cowell David Lyons save your legs steven curry by Caroline Russo | on February 14, 2013 | 0 comments | in Film News | Like it

Film  SAVE YOUR LEGS

Note from CR.. Hush Hush Biz Head Girl.. On seeing this film I must say I was not in the mood as one I do not like Cricket for one, but after seeing the cast list and that Steven Curry was going to be in town with the director  Boyd  Hicklin  for a interview, I gave it a chance to be open  and I was surprised myself  that I  enjoyed  the journey along with the corny bits and pieces filmed in India,  that I feel you should go and see this and go support this well done film. It was a delight to meet Steven and Boyd and we wish them well for the new release  on Save your Legs. Check out my interview with the guys, http://www.youtube.com/user/Hushhush9201

Edward ‘Teddy’ Brown lives for his suburban cricket club and his two best friends, Rick and Stavros. But when he realizes that his beloved team mates are moving on and growing up, he’s forced to take matters into his own hands and remind them of just how good cricket can be. Rallying a boyhood dream and his own teenage obsession, 35 year old Teddy leads his very ordinary cricket team into the extraordinary heart of India, on an audacious three match tour and a mission to meet cricketing legend, Sachin Tendulkar. While Ted’s best-laid plans are brought undone by the chaos of India, stumps fly, friendships fray and a life-changing comic adventure unfolds. The dream tour becomes a nightmare and the men are forced to face the realities of their friendship, confront their fears and Ted learns to move with the changing times.

When cricket obsessed Teddy Brown realizes his mates are growing up and moving on, he leads them and his D-Grade team on an audacious tour of India, where stumps fly, friendships fray and Ted learns that it’s time to start playing shots for himself. 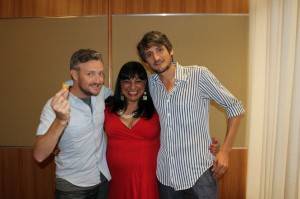