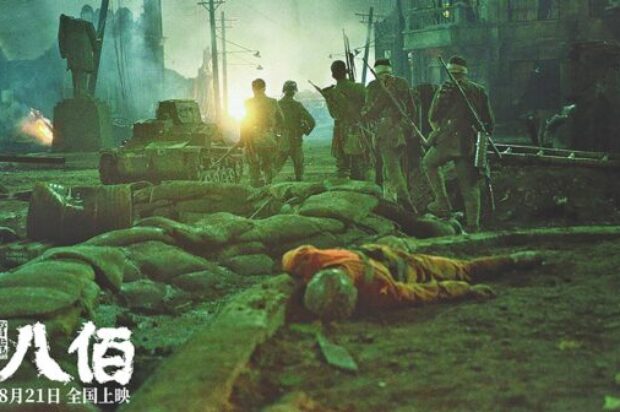 A FILM BY GUAN HU

This is a film that is based on true stories taking place during Sino-Japanese war in Shanghai, China, in 1937, the battle and protection of the Si Hang Warehouse. There are around 400 soldiers (so called Eight Hundred Heroes in history), holding out against numerous waves of Japanese forces for 4 days and 4 nights in order to cover Chinese principal forces retreating west.

On October 26th, 1937, it’s almost the end of the three-month battle of Shanghai. The National Revolutionary Army seems doomed to failure. The principle force has started retreating to the west while the “Eight Hundred Heroes” led by Commander Xie Jinyuan stay and defend the Si Hang Warehouse, also attempting to draw attention for worldwide support against Japanese aggression. By accident, a group of draft dodgers, including Duanwu, Hubei, Goat, Iron and Abacus get caught and forced to join the defence of Si Han Warehouse. The Japanese army starts several waves of attacks. All these besieged draft dodgers want is escape from this “tomb”. Across the river, residence on the concessions are watching the dying struggles of the Chinese army indifferently.

Through the progress, the fearless bravery and sacrifice shown by Chinese army have cast subtle influence among the draft dodgers and civilians on the concessions. The draft dodgers pick up the weapons and join the front line. People on the concessions are trying all the means to support. A brave girl guide even risks her life and delivers a national flag to the Si Hang Warehouse. A collective bond among soldiers and civilians cross the riversides has been forged through the simple yet solemn flag-raising ceremony.
Faced with pressure from multiple parties, the government commends the defending soldiers to cease resisting and to retreat. After holding out against numerous waves of Japanese forces for 4 days and 4 nights, the group of draft dodgers have been through the moments between life and death and make their ultimate decision – they will stay behind to cover the retreat of the remaining forces. At midnight, under the fierce attacks from Japanese army, Xie leads the “Eight Hundred Heroes” across the bridge toward the concessions, welcomed by the supporting civilians, while the remaining defenders stay in the warehouse and fight to the last man…

Eight Hundred is Guan Hu’s passion project over the years. The stories are almost forgotten and buried in the ash of times. To embark on the epic journey of rediscovering the long lost past, the director reunites with his award-winning team and also reaches out to international talents for collaboration. The actors are chosen from nationwide auditions and have to committed themselves to the 8-month long shooting period. In order to be truthful to the history, the production team spend more than a year to reconstruct the whole locale. The Si Hang Warehouse, the Su Zhou River and the numerous buildings on the concessions are all built in actual sizes. It’s also the first Chinese language movie shot in digital IMAX camera.
promotional pic material for The Eight Hundred Photo: IC