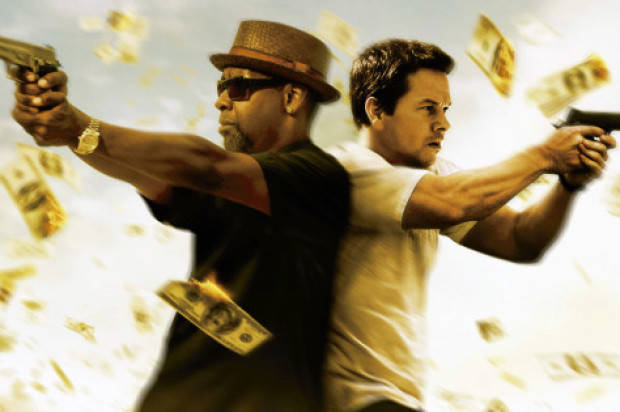 Every now and then it’s OK for cinema to present something uninspiring, something so generic and by-the-numbers that it almost feels refreshing in its attempt to not bring anything new to the table.  Such is the case with ‘2 Guns’, an unapologetic throwback to the buddy-cop action films of the 80’s and 90’s that easily likens itself to such fare as ‘Beverly Hills Cop’ and ‘Bad Boys’.  With violence intended for an adult audience, corny jokes, well-staged action sequences, and a neat smattering of nudity, you’d swear the 1980’s had reclaimed the theatre.

There’s nothing particularly ground-breaking on offer with ‘2 Guns’ but the debut match-up of Denzel Washington and Mark Wahlberg should be enough to garner interest as the duo seem to be enjoying themselves immensely, playing off one another with ease allowing proceedings to be that much more digestible – a welcome additive given how convoluted the plot is.  On first glance Bobby Trench (Washington) and Stig Stigman (Wahlberg) are in the bank robbing business, pocketing a cool $3 million from a heist in New Mexico where the stolen money belongs to drug lord Papi Greco (Edward James Olmos).  Not long after discovering that the supposed $3 million haul is actually in the $40 million+ range and both men are actually undercover agents – Bobby working for the DEA and Stig in Naval Intelligence – they turn on each other only to be abandoned by their superiors which ultimately leads them to working together again to not only take down their crooked associates but a sadistic enforcer (Bill Paxton) intent on recovering the stolen cash.  Did you get all that?

It is a shame that there’s a bit too much going on with ‘2 Guns’ as films of this ilk should be easy entertainment and though director Baltasar Kormakur delivers a lighter edge here than he did with his previous effort ‘Contraband’, a little restraint on the whole wouldn’t of gone astray, especially on the slow motion “walking away from explosions” shots that these kind of films love to incorporate.  It isn’t a fatal mistake though as the films this is seemingly paying homage to were never ones to show restraint, and you can’t help but secretly love the cheese factor a slow motion moment delivers.  One thing it does have going for it is its casting and outside of Washington and Wahlberg, both of whom seem tailor made for the respective roles, the criminal trio of Olmos, Paxton and James Marsden proves particularly effective.  Yes not only does ‘2 Guns’ have a decent villain, it has three with each of our leads squaring off with their own antagonist whilst sharing a mutual third.  Washington’s nemesis comes in the form of a scene-stealing Paxton whilst Wahlberg goes one-on-one with a suitably buffed up Marsden as his NCIS superior.  Olmos as Papi Greco is arguably the main villain of the piece, and as expected he gets by chewing on a bit of scenery in each subsequent scene.

As alluded to before ‘2 Guns’ won’t win any awards and it doesn’t cut it as a must-see movie outing, but it’s not pretending to be anything else other than a throw-away slice of shoot ‘em up action slush with a neat sense of humour and a proud adults only rating.  It’s a neat change of pace for the more revolutionary cinema out at the moment and, if nothing else, it demonstrates how to make a Michael Bay action movie without the incompetence of Michael Bay.

My rating 3.5/5 (Not the sharpest shot but avoids firing blanks)