Film Review : Ant-Man and The Wasp 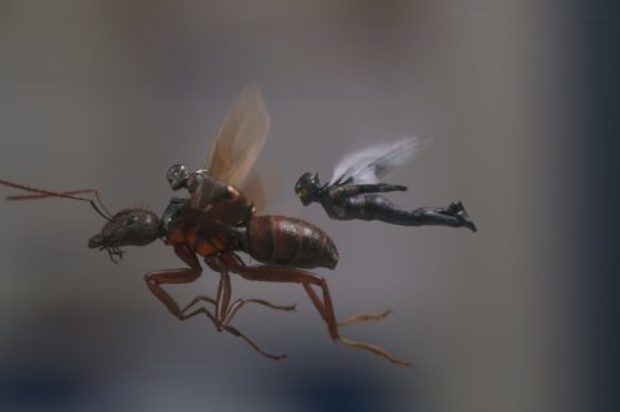 Ant-Man and The Wasp

There are few more appealing actors in the movies right now than Paul Rudd. Only last week I suffered through the dismal Ideal Home, a soggy smidgeon of sentiment about a gay couple discovering parenthood, where Rudd shared the screen with Steve Coogan; Rudd gave us authenticity while Coogan wore his fur-wrapped queen like a suit of tinny armour. Schmaltz to the nth degree, the only reason to tune in was Rudd. With that smile and those eyes,, he emerged unscathed. He does the same thing in Marvel’s 20thfilm Ant-Man and The Wasp, an undeniably better vehicle. As with Ant-Man, the character’s splashy 2015 debut, Peyton Reed directs again and you can feel the connection. Rudd and Reed are a dynamic duo and Reed’s sense of comic hysteria that a true superhero flick should have is as strong as ever. These days superhero movies have grown so snooty I feel I should genuflect to the screen. Mr. Reed though, he gets the joke. They Are A Joke, and the lighter and wilder the better. Here again, he brings the B-grade virtues and ensures his hero, a father first and superhero second, is a genuine character both in and out of the suit. Nor does he need to worry about saving the fragile universe. Two damsels in distress will do.

So, in 1987 Janet Van Dyne aka Wasp, the wife of the notorious Dr. Hank Pym and mother of Hope (now a Wasp herself), vanished into the quantum realm after shrinking to disable a Soviet missile and she hasn’t been seen since. Many years later, today actually, they enlist Scott Lang aka Ant-Man (currently under house arrest following his Berlin escapade with Captain America) to enter that realm with the hope of a family reunion. Dr. Pym, whose scientific advances never seem to end, has built an extraordinary laboratory, the key to discovering his wife’s whereabouts, that can be shrunk to suitcase size and a bucktoothed black marketeer named Sonny Burch wants it badly as does Ghost, an unstable villainess who can “phase” through furniture, vanish at will, and win every battle. Literally speaking her opponents don’t see her coming and this dying orphan needs Wasp’s quantum’s energy to restore her life. The FBI, the police, gangsters, everybody wants a piece this time.

Whether you’re scientifically inclined or not, Reed ensures that the action rests on little more than a MacGuffin and so headlong into the fray are we thrown, that suitcase moves into second place. This is all about the chase and it’s fully charged. With smooth nods to gender equality, blink and you’ll miss it special effects (those matchbox cars!!), a dizzying dash down the rolling hills of San Francisco, an ongoing gag about truth serum, and a solid cliffhanger (don’t let those end credits fool you, there is a teaser for round three), Reed’s film slams, bangs, and giggles its way to the final curtain. Rudd, one of five credited screenwriters, wins of course and some of the dialogue falls flat (name a B-grade movie where it doesn’t) but he has great support from the alluring Evangeline Lilly as The Wasp 2.0, Michael Douglas, steely-eyed and deadpan as ever, Michael Pena as Scott’s bumbling associate, and an oversized ant who steps in to cover Scott sneaking out on his house arrest. Even when it occasionally goes clunk, Reed is always two steps ahead.