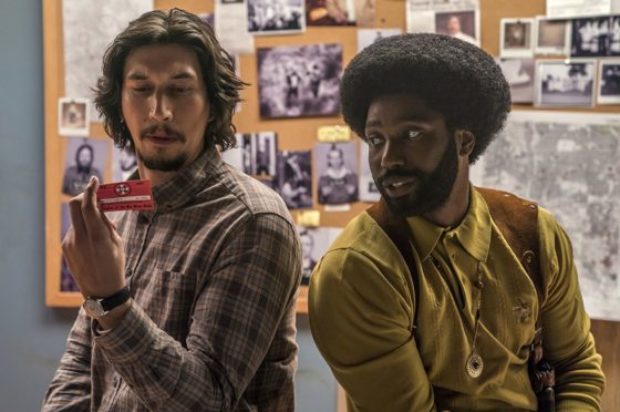 Spike Lee in conjunction with the team from “Get Out’s” new offering is a comedy based on the true story of Ron Stallworth (played by John David Washington) he is the first black policeman in Colorado Springs . He receives some racist ribbing from one particular officer but not content to remain in the records room he put himself forward to go undercover. At first he is rejected but is then sent to attend a meeting of the Colorado Black Student Union where there is guest speaker a former Black Panther. It is here he meets the student president and love interest.

There are some laugh out load moments and Lee gives the viewer a script that moves along at good pace with the story of Ron Stallworth infiltrating the KKK by phoning them while pretending to be a white Christian. He enlists another detective Flip Zimmerman (Adam Driver) a Jewish Cop pretending to be the white Christian Ron Stallworth when face to face with the Klan members. The movie has some cool references to the 70s black exploitation films like Shaft and the fashion and night club scenes are really enjoyable.

Harry Belefonte gives a powerful speech during which Lee cuts to the KKK watching Birth of a Nation interplayed to good success. The contrast is striking and very distinct. The characters though are unrealistically contrasting all the Klu Klux Klan remembers are total mindless idiots and the Black Student Unionists as well spoken educated and intelligent. The stereotyping works for the comedy affect but dilutes the message and presumes the audience is incapable of deciding right from wrong without being beaten over the head. The wicked KKK extremists get what he deserves and the Bad cop gets his just rewards.

There are several Jibes at Trump which get a good reaction but in this movie’s audience it’s preaching to the converted and the film felt a lot like that all along . The most potent part of the film was the last few minutes with footage form the white nationalist march on Charlottesville Virginia on August 11 2017 and the aftermath when a car drove through the counter-demonstrators and killed Heather Heyer. The now famous Trump remarks about good and bad people on both sides makes the sterotypes in this movie seem more plausible.

Enjoyable on many levels with a message and no danger of anyone in the audience relating to the “Bad Guys” this may become Spike Lees most successful box office movie to date but the one dimensional characters and lack on character depth dilute the issues.