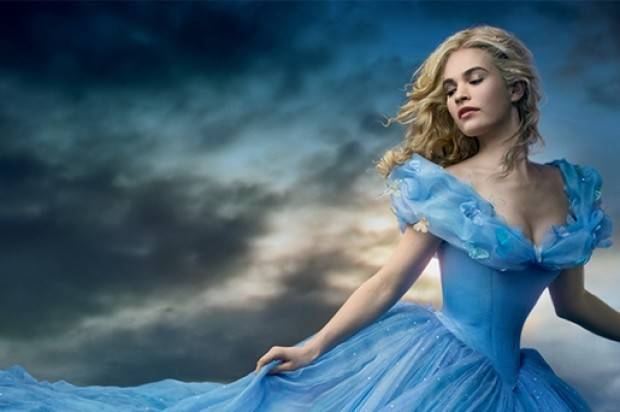 Foregoing the CGI-heavy, more fantastical based tendencies of their recent classic story updates (‘Alice in Wonderland’, ‘Maleficent’, ‘Oz the Great and Powerful’), the live-action fairy tale telling of ‘Cinderella’ is gloriously traditional, a lovingly-made romance that will please the audience familiar with the classic animated incarnation, and should satisfy a new generation of eager film goers.

Having said that, the fact that this version of ‘Cinderella’ is light on special effects and sparse on action, the new generation might not know what to make of a film that is suitably old-fashioned, with no winks at the audience along the way and a heroine that hasn’t been toughened up to a modern degree. One could argue that director Kenneth Branagh (changing his tune considerably from the original ‘Thor’ and last year’s ‘Jack Ryan: Shadow Recruit’) went for the safe option by adopting such a harmless mentality, but when nearly every contemporary re-telling tries to out-do its predecessor in every form, it’s refreshing to witness a product that revels in its classic beauty and innocence.

The story, in case you weren’t familiar, tells of young Ella (Lily James, ever-so-graceful) who grew up under the constant love and attention of her adoring parents (Ben Chaplin and Hayley Atwell). When her sickly mother passes on, her father seeks comfort in the company of Lady Tremaine (a wicked Cate Blanchett), a dreadfully arrogant woman if ever there was one, who extends Ella’s little family with the arrival of her own snotty daughters, Anastasia (Holliday Grainger) and Drisella (Sophie McShera). When her father too sadly passes, Ella is left to fend for herself and becomes an outcast in her own home when Lady Tremaine, the most vindictive of social climbers, takes it upon herself to rule the household as only she knows how. Despite the needless torment she experiences at the hands of Lady Tremaine, Anastasia and Drisella, who dub her “Cinderella” due to the soot she’s often covered in as a result of cleaning out the fireplace, Ella remains defiant and survives her days honouring her parent’s legacy by being good and kind; her animal friends, specifically the mice and geese, are thrown in for good measure to keep her company.

Naturally we all know love will prevail when Ella meets the handsome Kit (Richard Madden) when riding in the forest one day. Passing himself off as an apprentice at the nearby kingdom, she leaves their meeting blissfully unaware he’s really the prince, and due to his father (Derek Jacobi) urging him to find a wife, Kit sees no better opportunity than the present to open the invitation to the royal ball to all women in the land to attend, hoping Ella will make her presence known. Expectedly reprimanded by Lady Tremaine for even thinking she could attend the event, Ella, ever the optimist, finds solace in her rodent friends before a chance meeting with an elderly beggar reveals her destiny. As we witness the beggar magically convert and announce herself as Ella’s fairy godmother (Helena Bonham Carter), the film finally marks its “it” moment when the mice are transformed into stallions, lizards into footmen, a pumpkin into a carriage, and Ella’s destroyed dress into a blossoming ballgown, complete with glass slippers. It’s a magical sequence, one that seems directly lifted from the animated original, and it’s within these frames that Branagh proves his technical strength.

Cinematographer Haris Zambarloukous (‘Mamma Mia’, ‘Thor’) has filled every frame with scrumptious colour, with costume designer Sandy Powell (‘Shakespeare In Love’, ‘The Aviator’) and production designer Dante Ferretti (‘The Age of Innocence’, ‘Hugo’) outfitting them with effortless grace, and under the keen eye of Branagh, ‘Cinderella’ is quite simply a visually stunning feature; one that also commendably gets by with as little CGI as possible to truly capture the heart of the story. In addition to the behind-the-scenes magic, Branagh has assembled a stellar cast with young Lily James an absolute treat as the titular heroine. Known mainly for her role on TV’s ‘Downton Abbey’, James possesses a captivating screen presence, one that easily affords her the right ingredients to be a “Disney princess”. Madden makes for a charismatic prince, and he is well supported by Jacobi as his sensitive father and Stellan Skarsgaard as a scheming duke. Grainger and McShera toe the line of over-stepping their comic relief boundaries as the bratty step-sisters, but thankfully their willingness to appear as stupid as the story calls for ironically saves them for embarrassing themselves, and Carter is a pleasure as the preppy fairy godmother. It’s Cate Blanchett though who steals the show with her subtle scene-chewing (perhaps nibbling is a better description) as the truly despicable Lady Tremaine, the film earning more points for not stacking her with some attempt at a humanising backstory in an attempt to evoke sympathy; this character is just a miserable woman and the film has no shame in making her a truly hateful character.

As a 30-year-old man I’m certainly not in the demographic for ‘Cinderella’, so I’m not entirely sure what it says about me in that I enjoyed this film as much as I did, but there’s just such refreshment in viewing a story that’s simple, elegant and beautifully made. There’s no bells or whistles, no epic fight sequence, and no overt sex-appeal to attract the masses, there’s just good old-fashioned storytelling done right.