fifty shades of grey Sexual Themes and Nudity Strong Sex Scenes by Caroline Russo | on February 12, 2015 | 0 comments | in Film Release & Reviews | Like it 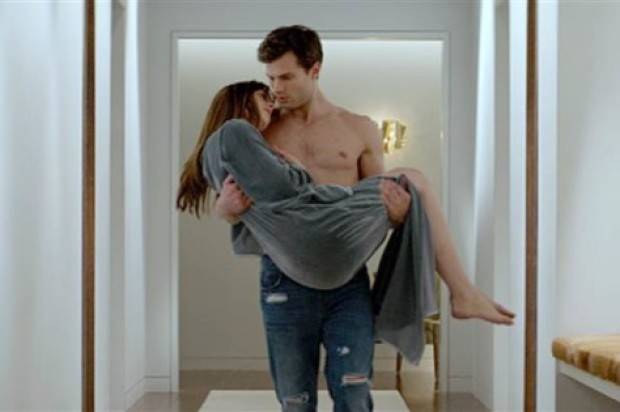 Adapted from a piece of glorified fan-fiction that some may be familiar with, ‘Fifty Shades of Grey’ leaps from page to screen no doubt hoping it will re-capture whatever magic it cast to originally push 100 million copies of EL James’ (poorly written) prose. Though the film doesn’t interest me on a story-level, I can’t deny my curiosity to see how the material is handled, given the book’s heavy focus on sex and its various violent offshoots from the “romance” between doe-eyed virgin Anastasia Steele and the crisp, dominant Adonis that is Christian Grey.

There’s certainly something here to keep you watching, but exactly what is harder to pinpoint. Objectification, narcissism, radicalism, masochistic sexual urges – these are all themes ‘Fifty Shades…’ toys with yet can’t seem to focus on just one for its 2-hour plus running time. The script from Kelly Marcel doesn’t help matters either with some truly pedestrian writing (“I’m fifty shades of f***ed up” as Christian so eloquently describes himself) and most of the interaction between the lead players reduced to hard glances and lip biting. As for said players and just how they come to be, the film wastes no time in setting up a “meet-cute” between Ana (Dakota Johnson) and Christian (Jamie Dornan) when she travels to his office to interview him for her college newspaper. As she’s a last-minute substitute, original interviewer Kate (Eloise Mumford) is down for the count with sickness, Ana is unprepared in every possible way for the “Christian Grey experience”; the film driving this home in the most transparent fashion in this scene which culminates in Ana leaving the interview to catch her breath in a downpour of rain.

As smart and responsible as Ana is, it doesn’t take her long to become drunk on the resigned magnetism of Christian; after a cup of coffee Christian is already in turmoil that he has “to let go” of Ana. Melodramatic much? It only escalates from there when he shows up at her workplace (a hardware store) and proceeds to purchase cable ties, rope and tape – the audience already in on the joke – which practically renders her comatose when he asserts that he won’t need coveralls for his clothes as his DIY activities don’t include garments in the first place. Oh it’s just all too much! The film attempts to romanticise their relationship with sequences of him whisking her away in his helicopter (the accompanying soundtrack another unsubtle reminder of Ana’s inner-monologue – “I’ll let you set the pace, cause I’m not thinking straight”) but it’s not enough to detract us from the unhealthy liaison they’re pursuing; when Ana informs Christian that she is a virgin, his reaction to perhaps second-guess her as his next BDSM conquest is replaced by “rectifying the situation”. Following her first coital experience, she’s giddy as can be and making him breakfast. I’m sure it’s meant to seem cute but it feels more uneasy than anything else. Props though to the cut-away shots of focusing on Christian readying a condom during this scene; it may be uncomfortable but at least it’s safe.

Once Christian details his specific sexual lifestyle to Ana, and drafts a contract in hopes of her joining him in this journey – he the “dominant”, she the “submissive” – the film finds a bit of a spring in its step when Ana proposes a business meeting to overlook the specifics; she’ll consent to a “prescribed diet” and limited alcohol intake, but the idea of ‘extreme insertion’ (a term not used in the film but for mere review readable purposes) is firmly a “no”. And just as Ana appears to show a little backbone and perhaps reject Christian’s offer, she frustratingly surrenders all over again when he shows up in her house uninvited (clearly a break in doesn’t faze her) and proceeds to tie her to the bedrail and, once again, perform various MA15+ rated acts. Once we’ve made it through a few more sexual encounters (both served to the crooning of Beyonce) ‘Fifty Shades…’ finally shows signs of being something genuinely interesting when Ana demands to know just why Christian can only enjoy sex in this manner, and subsequently asks him to “punish” her so that she can truly understand. It’s this scene that gives Johnson the chance to fully realise the character, and it’s a shame it comes so late in the offering as Ana’s reversal from being submissive to holding her own is the one aspect of the story you patiently wait for.

Johnson (the offspring from Melanie Griffith and Don Johnson) is a true discovery and the film’s saving grace; her mix of plain-Jane awkwardness and vibrant sexual awakening perfectly matched. And though she is working with less-than-stellar dialogue, there’s evidence of a legitimate actress burying beneath the surface that ever so often we get the slightest glimpse at. Dornan, on the other hand, is less convincing, a major issue for a feature that banks on the eroticism of its male creation. Whilst he is perfectly acceptable aesthetically, and strips down enough to showcase his lean physique, there’s nothing particularly sexy about him, and matters aren’t helped that the Irish model-turned-actor struggles with his American accent; one can’t help but wonder that perhaps deviating further from the book – and there’s enough from the pages that have already been removed for the film – and maintaining Dornan’s Irish twang might’ve upped his allure considerably.

Whilst it’s sure that ‘Fifty Shades of Grey’ will make a hefty mint at the box office (its Valentine’s Day release is a stroke of pure genius), it’s unlikely to be a film that will draw the masses outside of those who have taken to the novel series – though, as we know, there’s enough of those to sell out multiplexes the globe over – and, on its own accord, it’s a film that’s too gloomy to be considered romantic, too vanilla to be sexually provocative and too fluffy to be a dark character study. If the film’s ending is anything to go by (and I’ll warn viewers that deeming it abrupt is an understatement) then perhaps the inevitable sequel will delve into more interesting viewing, but whether or not you want to wait until Valentine’s 2016 to find out is another story entirely.

As negative as I sound in detailing the film’s downfalls, the truth of the matter is that ‘Fifty Shades of Grey’ is far from the trainwreck many expect it to be. It’s miles better than the book (not an unachievable feat) and much of the criticism is derived from the original source material, which has evidently proved difficult to transfer to the big screen. The sex isn’t overly sexual (for better or worse) and for every underwhelming moment we witness, there’s at least the simmer of a spark waiting with bated breath to shine through.