Bennett Miller Drug Use and Violence FOXCATCHER by Caroline Russo | on February 2, 2015 | 0 comments | in Film Release & Reviews | Like it 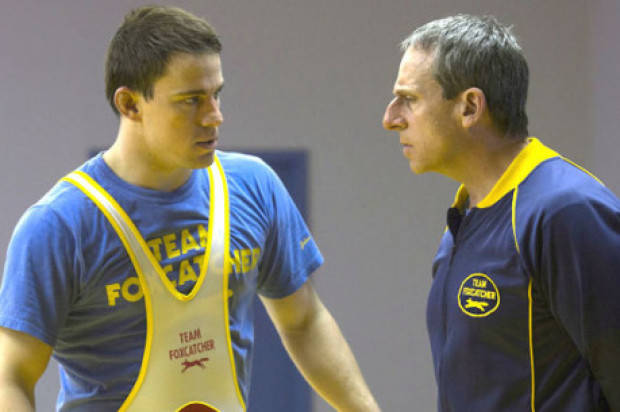 Classification: M (Drug Use and Violence)

Managing to transform the darkest of subject matter into a form of entertainment, however bleak it may be, Bennett Miller has created such an atmosphere of menacing anxiety in ‘Foxcatcher’ that it almost makes a mockery of more traditional horror films that attempt to do the same. To get the most out of ‘Foxcatcher’ it’s ideal to not know any of the facts of its true story – I only knew fragments of the tale – but regardless of your knowledge, you’ll be hard-pressed to not get caught up in this tale that slowly burns towards the inevitable.

The story itself initially focuses on Mark Schultz (Channing Tatum), a one-time Olympic gold medallist for the USA in wrestling, who holds on to his former glory as much as he can whilst he slums it in the shadow of his older brother Dave (Mark Ruffalo), also a gold medal winner, who has managed to garner a healthier lifestyle off his success with a loving wife (Sienna Miller) and family, his own training school, and a generally more positive personality. Mark, not as bright or socially adept, yearns for more and comes as easy prey for a predatory figure like John Du Pont (Steve Carell), a wrestling enthusiast whose family has amassed wealth through munitions. Struggling similarly in social aspects, and constantly craving validation from his mother (Vanessa Redgrave), there’s a sense of understanding between the two so when John offers the opportunity to stay at his estate and train a team for the next Olympics, the vulnerable Mark jumps at the chance, not willing to question any possible ulterior motives.

Pleading with Dave to join him, Mark lives an isolated life on Du Pont’s estate as he commences training, all under the watchful eye of John who slowly creeps his way into Mark’s existence as a father figure, mentor and friend. At first John appears untrustworthy and particularly smitten with the gullible Mark, but it would be all too easy to assume that’s where John’s motivations lay; and the real Mark Schultz has adamantly stated that any homosexual undertones the film suggests are purely fictionalised. As the story progresses we learn more about John, and the aforementioned similar traits he shares with Mark grow more apparent, you sense he sees himself in Mark, but their bond quickly grows sour.

Miller has drenched ‘Foxcatcher’ in a muted shade of despair, and the tension that is built off every sequence benefits the slow burning pace the film adopts, and as valuable as he is behind the camera, it’s the lead trio of Carell, Tatum and Ruffalo that prove the film’s biggest draw. Carell delivers the type of performance that transcends everything we thought to have known about the actor, and his hook-like nose and unflattering teeth allow him to completely disappear into a character that’s as pathetic as he is fascinating. The accolades he has received are well deserved, and understandably he is overshadowing his co-stars as he walks away from the film, but it’s Tatum that emerges as the true star. We know now that he is more than just a good-looking guy with screen presence, but ‘Foxcatcher’ proves his worth as an actor as he delivers a heart-breaking performance void of vanity and full of pathos; with an exaggerated nose and jaw, he too disappears into the identity of his character. Tatum has admitted that filming ‘Foxcatcher’ was one of the hardest experiences he’s endeavoured as an actor, and his suffering is laid bare for all to see with one particular scene in a hotel where Mark breaks down and beats himself up (literally) before bingeing on junk food, only to have to lose dozens of pounds of bloating in under 90 minutes highlighting both the mental instability of the character, and the actor’s dedication. Ruffalo, as to be expected, is tremendous as Dave, the character seemingly the only one who can bring out the best in Du Pont.

Deliberately paced so that you are forced to remain alert, even if the film appears to be in no hurry, ‘Foxcatcher’ is an expertly crafted mystery where everyone involved is giving nothing short of their all. It’s sad, uncomfortable, and spectacularly haunting; it’s yet another reason to behold the joy of sophisticated filmmaking.