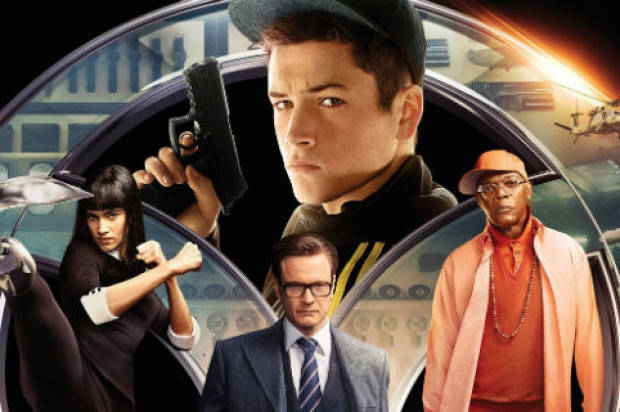 With all the controversy surrounding ‘The Interview’, the Seth Rogen/James Franco comedy that focuses on two dim-witted journalists instructed to assassinate North Korean leader Kim Jong-un – a plot line which subsequently led to the infamous Sony Pictures hack – it’s surprising that ‘Kingsman: The Secret Service’ has slipped through the radar. Brave, manic, over-the-top but never anything less than fun, this 007-on-steroids actioner comes complete with a finale so wildly inappropriate, yet still ever-so-entertaining, that your shock will be masked by fits of laughter. Reuniting the duo that unleashed ‘Kick-Ass’ onto an unsuspecting audience in 2010, director Matthew Vaughn and graphic novelist Mark Millar, ‘Kingsman’ is likely to appeal to the same audience – those that aren’t easily offended and can handle their comedy and violence in the most extreme of circumstances.

Essentially a James Bond origin story, told with its tongue firmly planted in its cheek, ‘Kingsman’ centers itself on Eggsy (Taron Egerton), an aimless punk, who’s oblivious to his prestigious birthright to be involved with a group of specially skilled spies known as the Kingsman. Following an unforgettable introduction to the very proper, but highly lethal, Harry Hart (Colin Firth), Eggsy agrees to his mentoring, unaware of the connection the two share due to Eggsy’s father once working under similar guidance from Hart. Spending his days thwarting local hoodlums and attempting to keep his junkie mother on the straight and narrow, Eggsy has experience when it comes to dealing with unwanted situations, but Kingsman training is in a league of its own, and though he’s working with a group of potential recruits all seemingly more qualified than he, Eggsy proves his natural ability and is, unsurprisingly, transformed into the ultimate spy.

As capable as Eggsy is though, Hart and the other veteran members of Kingsman – the almost expected casting of Mark Strong and Michael Caine – are unsure within their own capabilities on how they will handle their latest threat – internet mogul Richmond Valentine (a lisping Samuel L. Jackson, absolutely shining). Valentine is believed to be responsible for the disappearance of several high-profile international figures, and his plans to eradicate the majority of the world’s population prove his stance on the environment is far removed from reality. Just how he intends to pull this global extermination off is one of ‘Kingsman’s many facets of insanity, but under the joyous direction of Vaughn the film manages to keep itself somehow grounded despite the kinetic surrealism that surrounds it.

Thanks to the likes of Firth and Caine, the film has a distinct wit of British dryness about it (both actors are perfectly cast) which is perfectly offset by the video-game zaniness the majority of the film adopts. The action sequences are particularly agitated, most of them defying description with their frantic energy, none moreso than the finale which has to be seen to be believed; a sequence about 3/4th’s set in a church also earns points for being one of the most bizarre, and violent, set pieces seen on screen in a good while. In addition to Firth and Caine, newcomer Egerton makes a strong impression in his first leading role, balancing durability and vulnerability in succinct unison, as does Sophie Cookson as another Kingsman recruit who predictably falls into the love interest category, but due to her being one of Eggsy’s competitors, her character never wavers to being second fiddle.

I didn’t know what to expect from ‘Kingsman: The Secret Service’, early trailers indicated material set for a pre-teen audience, but when I walked out I was utterly dazed but massively entertained. A smile from ear-to-ear is always a good indication that I have enjoyed myself, and I hope that this resonates with an audience enough for future Kingsman tales to be told.