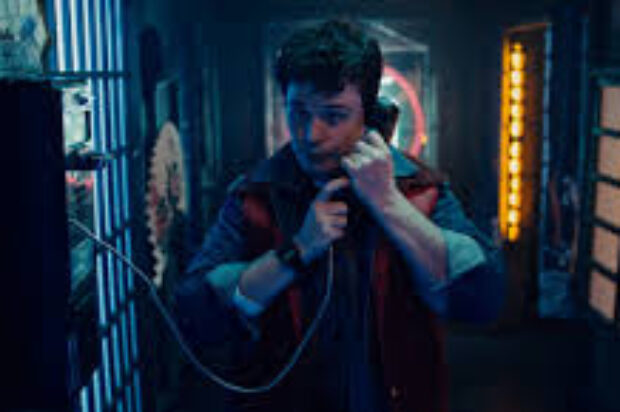 Vicious Fun is a new horror-comedy that is without a doubt an over the top wacky slasher thriller. Lead character Joel, (Even Marsh ) is a 1980’s film critic for a national horror magazine who also thinks he got a great idea for a horror film who he tries to pitch at the beginning of the film to horror producer.

Joel, is a bit clumsy outspoken average type of guy who is secretly in awe of his roommate. Sarah played by (Alexa Rose Steele) returns home after a date with Bob (Ari Millin ) and with having the girlfriends over later she asks Joel to leave the house for the night and as he ventures out he comes across Bob outside and gets the feeling he could be cheating on her. He can’t help but followers him in her car into a low dive bar to sus him out more’ and gets to have a few drinks with Bob who then leaves Joel, who alone then gets smashed and passes out in backroom to then waking up and finds himself trapped in a self-help group for serial killers. From here he aims to blend in as he fears he could be the next victim. Then the fun begins as they do discover when Bob comes in late to the meeting and figures out that Joe is lying and things get out of hand and it’s in for the kill plot! It was shot in Hamilton, Ontario, “Vicious Fun” is directed by Cody Calahan and produced by Chad Archibald and Calahan. Director Cody Calahan.“ says “It felt like the right time for us to branch out and make something outside our comfort zone,” “These characters are wacky, satirical and genuinely funny. I can honestly say that I’ve never had so much fun on set and I think that translates directly to the screen. Vicious Fun marks the start of a new slate of films for us and we’re committed to pushing ourselves in new directions.”

“It has been picked up in Australia and New Zealand by Jessica Butland at Radioactive Pictures. Jessica was involved with the film from its conception, and is set to bring many more titles such as this to Australia”

This is a film that will attract all horror slasher lover fans as it will deliver as to what the title says Vicious Fun. There are some good scenes of overkill. Get your invites to all your horror friends and band together with your popcorn and enjoy the ride and may I add the music score its a ripper LOL and you appreciate the end!