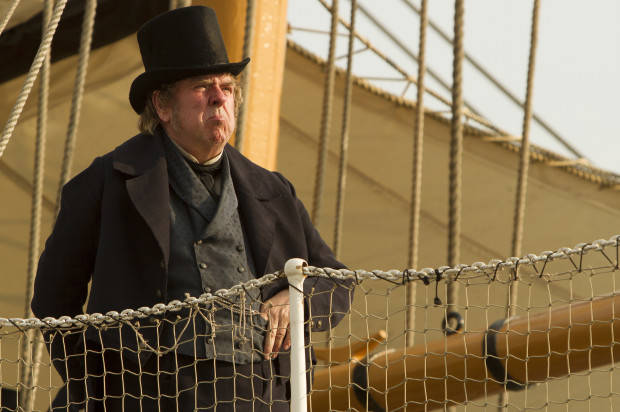 MR. TURNER explores the last quarter century of the great if eccentric British painter J.M.W. Turner (1775-1851). Written and directed by film legend, Mike Leigh who takes you on a rather long journey of his life that unfortunately is half hour too long and in parts of the film rather taxing on your time.
Timothy Spall in the title role, is excellent in this part as he plays a rather unattractive character of Mr Turner. It does follow the time of how he is profoundly affected by the death of his father, loved by a housekeeper he takes for granted and occasionally exploits sexually, he forms a close relationship with a seaside landlady with whom he eventually lives incognito in Chelsea, where he dies.
Throughout this, he travels, paints, stays with the country aristocracy, visits brothels, is a popular if anarchic member of the Royal Academy of Arts, has himself strapped to the mast of a ship so that he can paint a snowstorm, and is both celebrated and reviled by the public and by royalty.
For anyone that appreciatetes the art world and the creations of specially what this mad eccentric painter did, they may like to see this film but for the rest I not sure if you do the distance as it is slow and dribbles in many areas.