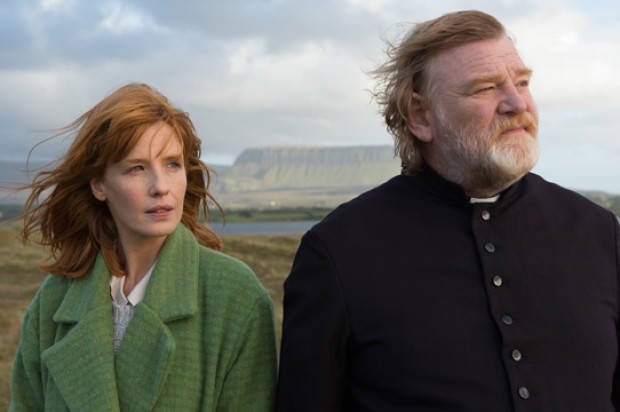 Whilst adverts for ‘Calvary’ will have you believe it’s a comedy, albeit a dark one at that, John Michael McDonagh’s follow-up to his acclaimed debut ‘The Guard’ is a particularly tragic one. There’s humour peppered throughout, and quite often you’re unsure if you should laugh at the material, but it’s solely concentrated on a gloomy topic that is wisely never treated in a slight manner.

Opening with a particularly confronting excerpt of dialogue ‘Calvary’ centres on kindly Irish priest Father James Lavelle (Brendan Gleeson) and the knowledge that he will potentially die in one week’s time as the result of a warning from an unknown parishioner during confession. Unaware if the threat is real – the murder is to be an act of retaliation for crimes committed by the Catholic Church – Father James tries to live out the remaining days righting the many ills in his small community and, more importantly, to reconnect with his estranged daughter Fiona (Kelly Reilly) who has attempted suicide with unsuccessful results.

Much like ‘The Guard’, this film’s main strength lays with Gleeson whose performance is nothing short of glorious. Writer/director McDonagh clearly wants the audience to identify with, and love, Father James and the fact that they humanise him as a recovering alcoholic and an absentee father only makes his character stronger. Father James never pretends to be a perfect man but he is a truly respectable priest who hones a deep need to do service and better the lives of those around him – even if they don’t want it. His surrounding flock (as the case may be) are a particularly gloomy bunch with such upstanding citizens as the local butcher (Chris O’Dowd, showcasing his impressive dramatic chops) who openly allows his wife to cheat on him, an ER physician (Aiden Gillen) with strong atheism views, and a financial genius of sorts (Dylan Moran) who appears unnaturally detached from his own family and the white collar crimes he’s committed.

As the opening confessional scene informs us of someone’s desire to murder Father James stemming from the years of sexual abuse this unknown parishioner experienced at the hands of a priest, ‘Calvary’ never shies away from tackling topical issues, and this unfortunate legacy of sorts that has tainted the Catholic Church for decades is just one of the many issues the film boldly addresses. As tragic as it is to be confronted with that material, the film never over-steps its boundaries and ultimately the biggest tragedy is in the realisation that priests of James’ ilk appear to be a rare breed, with Gleeson’s character tolerable of such issues as adultery, suicide and homosexuality. It’s a wonderfully written character and Gleeson plays him so magnificently, particularly when working off Reilly as his equally faulted daughter.

Working off McDonagh’s previous film, and the more black comedic angle the advertisements have highlighted, ‘Calvary’ was a huge surprise for me as it delivered so much more than I was anticipating, and if this film suggests anything it’s that John Michael McDonagh is a filmmaker poised for prominence.