Film Review of ‘Dawn of the planet of the apes’

Andy Serkis DAWN OF THE PLANET OF THE APES Matt Reeves Violence and Infrequent Coarse Language by Caroline Russo | on July 14, 2014 | 0 comments | in Film Release & Reviews | Like it 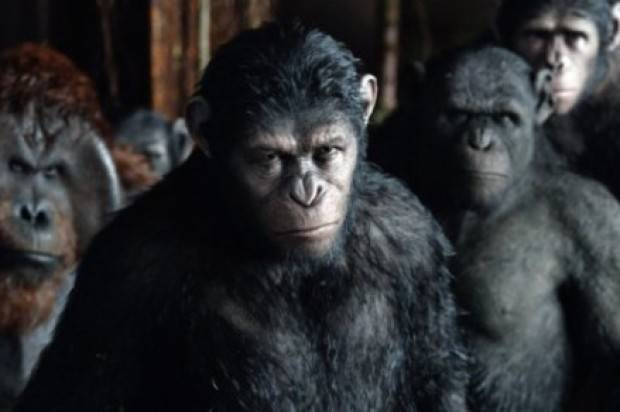 CINEMA RELEASE: DAWN OF THE PLANET OF THE APES

Though I personally wasn’t overly enthused with 2011’s ‘Rise of the Planet of the Apes’ (specifically its second half) it can’t be denied that, overall, it struck a chord with audiences and was viewed as somewhat of a rarity in that it was a blockbuster that rebooted its specific franchise to reasonable effect. In the 3 years since, director Rupert Wyatt departed and the majority of the cast opted out, though then again very few survived, but with the suitably fitted Matt Reeves (‘Cloverfield’) behind the lens, a stimulating and imaginative sequel has been created that manages to possess both brains and brawn.

Picking up an entire decade after the events of ‘Rise…’, ‘Dawn of the Planet of the Apes’ centres on the aftermath of the collapse of human civilisation due to an outbreak of a virus dubbed “the Simian flu” which originated from scientists testing on a collection of apes in a bid to find a cure for Alzheimer’s. Establishing themselves as the new keepers of the planet, the apes, led by Caesar (Andy Serkis), have created an idyllic life for themselves in the forest land of San Francisco. Not having come into contact with a human for 2 years, the apes’ existence is thrown into disarray when a group of survivors come across their living quarters and the war mentality of ape vs. human appears stronger than ever. Keen to co-exist with the humans, Caesar agrees to the group’s need to fuel their power resources at the apes’ camp, but a rogue ape, Koba (Toby Kebbell) and the other human survivors unwilling to live harmoniously threatens their fragile environment.

Clearly modelled on the final entry in the original ‘Planet of the Apes’ series, 1973’s ‘Battle for the Planet of the Apes’, Reeves and co. have created a film that is epic in every sense of the word. With a justifiably larger budget the film certainly plays on a grander scale, though refreshingly it avoids bombarding the story with overdone action set-pieces, instead allowing audiences to invest themselves in proceedings which in turn makes the livelier sequences all the more effective; the last quarter or so of the film is when ‘Dawn…’ really kicks its action gear into overdrive with some particularly inventive segments. Casting wise the film lacks a “name” actor as such (James Franco fronted ‘Rise…’) and though they take a backseat to the apes, the likes of Jason Clarke, Keri Russell and Kodi Smit-McPhee all manage to bring a sense of warmth to their respective characters. They aren’t particularly fleshed out but they’re given a decent enough backstory which helps them avoid being largely stock standard. Similarly, Gary Oldman as the leader of the surviving humans straddles the line of stereotypical raving lunacy but manages to bypass this by appearing somewhat sympathetic which helps justify his actions.

However in a film all about apes it’s understandable that they are the main attraction, and the larger budget has clearly paid off in the motion capture sense as Serkis is undoubtedly the film’s main star. Whilst the technology was particularly impressive in ‘Rise…’ it’s even stronger here with Serkis managing to convey the most realistic of emotions despite very little dialogue. The life and soul of Caesar is stunningly realised through Serkis’ eyes and mannerisms that had the whole film been focused solely on the apes, without a single human character, there still would’ve been an immensely intriguing one at hand. After Serkis’ portrayal in the previous film drummed up talk of Award credit for a motion-capture performance, his work in ‘Dawn…’ all but secures the perfect argument for recognising the future of actors and technology.

Proving that a tried series still has plenty to offer if given the proper treatment, and that not all action blockbusters have to be void of intellect (I’m looking at you ‘Transformers’), ‘Dawn of the Planet of the Apes’ is a highly intelligent science-fiction affair that both restores your faith in big studio offerings and a film series that, against all odds, is only improving as it gets older.