Film Review of ‘DELIVER US FROM EVIL’

DELIVER US FROM EVIL Eric Bana film review Scott Derrickson by Caroline Russo | on July 24, 2014 | 0 comments | in Film | Like it 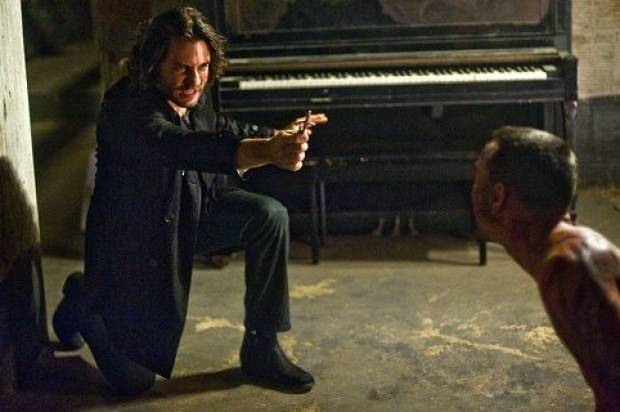 CINEMA RELEASE: DELIVER US FROM EVIL

Though it may be reaching cinemas on the claim that it’s “inspired by true events” (a horror movie marketing hook that has been getting more than enough mileage as of late) ‘Deliver Us From Evil’ still can’t help but feel somewhat refreshing with it being void of the “found footage” gimmick, and wearing its mature rating on its sleeve. Based on the non-fiction accounts of the now retired NYPD officer Ralph Sarchie, who specialised in cases of demonic possession, this supernatural thriller feels practically archaic (or at least from the early 2000’s) in that it’s so straight-forward in its delivery.

A B-grade ‘Seven’ meets ‘The Exorcist’ type affair, ‘Deliver Us From Evil’ centres on Sarchie (Eric Bana) as he investigates the seedy streets of The Bronx, constantly finding himself drawn to situations he predict will turn violent and benefit from his assistance. Referred to as his “radar”, Sarchie and his adrenaline junkie partner Butler (Joel McHale, looking particularly buffed and surprisingly effective in a more serious role) discover a link in the series of violent attacks they’re investigating relates to a trio of dishonourably discharged soldiers who were all involved in a tour of duty in Iraq.

Initially the premise involving the soldiers appears like a welcome additive to a story we’re already familiar with, sadly as time passes the plot continues on a rather convoluted path eventually coming alive in the final twenty minutes when we witness one of the more startling exorcisms seen on screen recently with impressive sound design, appropriate gore effects and an enjoyably physical performance from British actor Sean Harris (‘Prometheus’) as one of the soldiers. As by-the-numbers as it is, it can’t be denied that ‘Deliver Us From Evil’ looks the part with director Scott Derrickson clearly at home following ‘The Exorcism of Emily Rose’ and ‘Sinister’, both superior chillers in comparison, and producer Jerry Bruckheimer giving it a neat blockbuster sheen. The one major coup for the film however is Edgar Ramirez whose superbly charismatic performance manages to overwhelm Bana in every fashion. You’re pretty much guaranteed a solid turn from Bana, and here is no exception with him in top form as the family man torn between his duties to his wife (Olivia Munn) and daughter and to the city he wants to protect, but Ramirez is simply magnetic as Mendoza, an unorthodox priest who chain smokes and excessively drinks. Harbouring a past of illicit drug use and womanizing, Mendoza hopes to redeem himself through his work as a demonologist, and although the “edgy priest” angle could easily come across as inane, Ramirez manages to make it work.

‘Deliver Us From Evil’ doesn’t always see its ingredients fuse together cohesively, and there are stronger examples of all sub-genres explored here, but horror has been in short supply lately and, at the very least, this film gets points for trying by moving away from the expected and revisiting what we’ve come to know.