dead men tell no tales disney film review Johnny Depp by Caroline Russo | on May 23, 2017 | 0 comments | in Film Release & Reviews | Like it 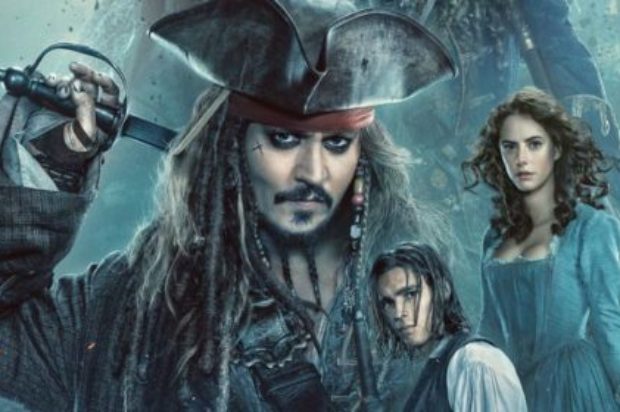 To call ‘Pirates of the Caribbean: Dead Men Tell No Tales’ the best entry in this surprisingly persistent series since the first sequel, 2006’s ‘Dead Man’s Chest’, isn’t the most glorious of praise but it’s the highest honour one can bestow upon this swashbuckler that tries hard to hold on to the magic so unexpectedly created by Gore Verbinski in the 2003 original, ‘The Curse of the Black Pearl’.

Overcoming the general scoff that came with both the notion of transforming an amusement park ride into a cinematic event and handing a then-beloved oddball like Johnny Depp his own headlined blockbuster, Verbinski defied the odds and delivered an overall satisfactory trilogy that neatly wrapped up its Jack Sparrow-led yarns before succumbing to studio-head pressure and overstaying its welcome with further, ie unnecessary, sequels. However, that’s precisely what happened with 2011’s much maligned ‘On Stranger Tides’, a non-event of a film that despite grossing $1 billion worldwide soured the legacy of the trio of features that came before and appeared to finally lay the series to rest.

Further escapades of Depp’s possibly pansexual, consistently inebriated Captain Jack Sparrow weren’t needed but Jeff Nathanson’s script provides a suitable-enough reason to lure him back to the sea in the form of the Trident of Poseidon, a mythical MacGuffin that has the power to break any curse. Young Henry Turner (Brenton Thwaites), the offspring of original trilogy beaus Will Turner (Orlando Bloom) and Elizabeth Swann (Keira Knightley), seeks said Trident in hopes of freeing his father from the cursed ship The Flying Dutchman, and it’s in his quest to find it that he crosses paths with Jack. Less requiring Jack for actual assistance and more needing him to make good on his encounter with the other-worldly spirit of Armando Salazar (Javier Bardem), an ethereal Captain seeking vengeance against Sparrow, the duo ultimately band together in their bid to find the Trident and outrun (outsail?) Salazar.

If that wasn’t enough, horticulturally-inclined orphan Carina (Kaya Scodelario) has her own personal reasons for finding the Trident, believing it will solve the mystery of her parentage; a diary left to her by her unknown father contains a series of clues that leads her to both this conclusion and to Jack & Henry, resulting in the unlikely trio setting sail together. As character-heavy as Nathanson’s script proves to be, and we haven’t even mentioned Geoffrey Rush’s return as the now-supremely wealthy Captain Hector Barbossa, it’s admittedly relatively easy to follow as it’s heavier on tiresome dialogue than it is on plot devices. And though the provided prose don’t always work in the favour of the likes of Henry and Carina (sadly, try as they might, Thwaites and Scodelario can’t evoke the same spark Bloom and Knightley managed in the films prior) directing duo Joachim Ronning and Espen Sandberg (2012’s foreign language Oscar-nominated feature ‘Kon-Tiki’) work their magic on such striking moments as a supremely entertaining set-piece involving a public-execution gone wrong for Sparrow, a moment that easily evokes the freshness of the original movies; said scene involves the blade of a rotating guillotine continuously flirting with lobbing poor Jack’s neck off only to momentarily retreat over and over again.

Though the sails have officially had the wind blown out of them, ‘Dead Men Tell No Tales’ is a far more satisfactory finish to the series than ‘On Stranger Tides’ threatened to be, and whilst it similarly gives in to an overblown finale that comes off like an impressive-sounding effect piece rather than a fully realised sequence like the climax of second sequel ‘At World’s End’, there’s a greater sense of fun had before it goes completely overboard. Of course, just as with all the previous films, much of the enjoyment lays with Depp’s performance of Sparrow, and as predictable as his delivery and mannerisms are, there’s still a joy in watching him stumble about with an effortless ease; the familiarity of it all though does confirm that there are no further dimensions of this character to uncover.

With fantastic production design, a slew of amusing sequences, and some stunning cinematography, ‘Dead Men Tell No Tales’ does hold enough treasure in its chest to prove a re-exploration worthy but it would similarly appear that any further diggings are for nought as the ‘Pirates’ brand have exhausted their gold on this final mission.