BLACK AND WHITE FILMS LEGENDS OF FILM Stan and Ollie by Caroline Russo | on February 19, 2019 | 0 comments | in Film Release & Reviews | Like it 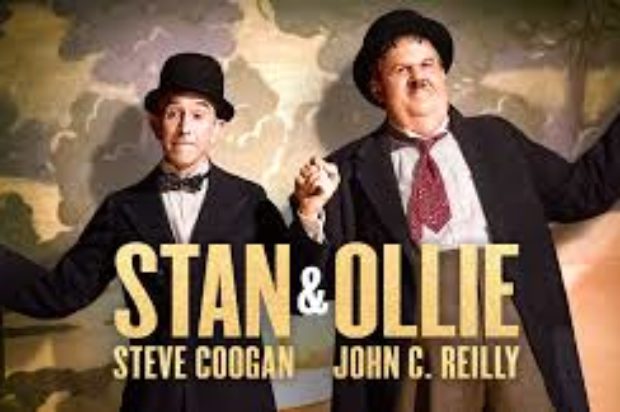 Both Coogan and Rilley give brilliant impersonations of the famous comedy duo Laurel and Hardy drawing the viewer into their lives and struggles. The movie begins on the movie lot during their hay day at a time when Chaplin was huge and making his own film .Laurels contract is up and wants to make their own films but Hardy’s still under contract and doesn’t want to cause waves . Unfortunately Laurel had lined up a new deal but Hardy doesn’t show and the duo are no more . Move forward several decades and they are both older and have been engaged to do an English tour.

What follows is a number of dates initially with very poor attendance but after some personal appearances and PR the audiences return. The journey takes them from run down bnb’s to the Savoy. Like other biopics this movie shows the hardships and struggles but this is a much more intimate portrayal and an insight into the creatiive mind of Laurel.

The two wives Shirley Henderson plays Lucille Hardy and Nina Ariana plays Ida Kitaeva Laurel are strong rivals and some of the funniest lines come from them in particular Ariana who’s timing is absolutely divine . Their arrival on the London leg of the tour adds a whole new dynamic to the film and even more of a peak behind the fascade , what is clear is that both women love their husbands and are dedicated to them .

This was a very enjoyable film I went in knowing very little about this iconic duo but thoroughly enjoyed the film, it started a little slow but built steadily and was totally engrossed by the end.

Stan and Ollie has been nominated for both Golden Globe and BAFTA awards which gives you an indication of the quality of the acting.