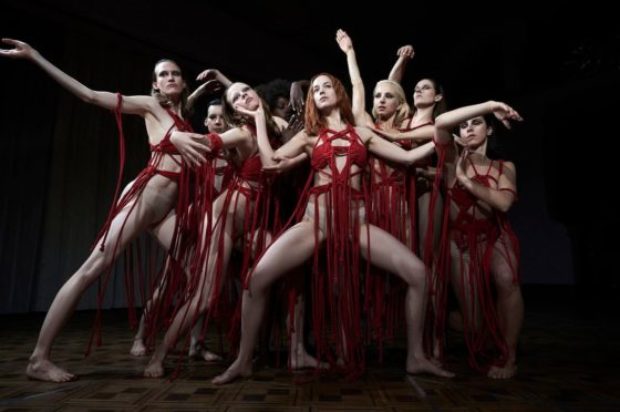 As I watched Suspiria, Luca Guadagnino’s reimagining of Dario Argento’s 1977 horror classic, a movie that impacted him deeply at the age of 13, I couldn’t help but wonder what Suspiria virgins, those that know nothing of the now notorious original, would make of it. After the world at large eagerly lapped up Guadagnino’s successful film Call Me By Your Name last year, and I remain in the minority, they were perhaps hoping for more of the tenderness they came away with. That film left me behind. I appreciated its narrative line and admired Michael Stuhlbarg’s tender performance but it left me with a craving. It was the first of Guadagnino’s successful run of films that didn’t feature Tilda Swinton but she’s back now, and in a big way.

Set in a gloomy West Berlin, all snow and sleet, the year is again 1977 and there is unease everywhere. A city with a Holocaust hangover where Red Army Faction groups stalk the streets, we first meet the deeply shaken Patricia (Chloe Grace Moretz) visiting with her psychiatrist Dr. Josef Klemperer (a startlingly disguised Swinton). Pacing the room and muttering, Patricia is convinced something is terribly wrong at the Markos Dance Academy she attends, witchcraft in fact, and she’s terrified. Initially Klemperer is a nonbeliever but soon, as it always does with the darker forces, it will become undeniable. To the uninitiated, the thrust, pull, and slash of both films is indeed witchcraft, a deadly coven, and here Guadagnino amps up what Argento only teased us with. There are more participants this time, they’ve embraced its power, and can converse without opening their mouths. The academy has just welcomed a new student, Susie Bannion (Dakota Johnson) who, in short order, dazzles Madame Blanc (Swinton again) with her talent. After she jumps and expresses in an interpretive (and unimaginative) dance (in a scene guaranteed to confirm the film’s notoriety, while she contorts, in a mirrored room below, a suspicious student contorts to death), she’s quickly granted the starring role in an upcoming performance of a piece anonymously titled “Volk” (people) while Madame Blanc’s watchful offsiders all declare she is The One. What One? None of the strangeness Susie witnesses seems to bother her and such is her determination, one could easily mistake it for the ambition of a thoroughbred. Meanwhile Klemperer, who mourns the mysterious loss of his wife during World War II, investigates and moves ever closer to the truth.

Argento’s film is now the stuff of legend. He has always declared it was nothing more than a nightmare and today it stands as one of the best entries to the giallo genre. The rich colouring, deafening score, and still shocking murder sequences blended brilliantly. Here, the colouring is more subdued, the dancing is too plain (Guadagnino keeps his camera back and above and cheats us of the intimacy), and he fans his story out further and uses historical elements to amp up the dread. Using the Holocaust is an easy pitch, it was all horror and its ripple effect has never stopped, but he also pulls in the Lufthansa Flight 181 hijacking horror for more texture and while the gambit is obvious, the world was in horrifying disarray (one can imagine Stanley Kubrick pulling such a stunt), it slows this epic film unnecessarily. I’ve seen the film twice now, chiefly to watch Swinton’s hypnotic performance as the doctor and a second viewing secures its strengths. Some will see it as little more than an arthouse director trying his hand at another genre. Others will see it as some kind of masterpiece.