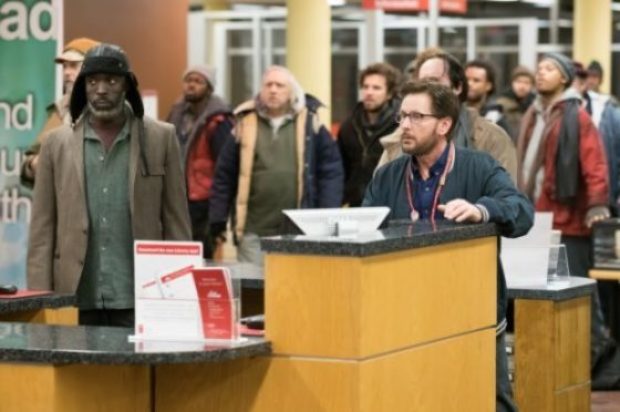 Emilio Estevez’s “The Public” is a film that has a lot to say and one that has taken actor-director writer long time to get this off the ground. 12 years ago it was set to flag after he did his last film “Bobby” and then finance crisis set in and lost the funds to make the film. But as things progressed, so did the subject of this film that now has narrated itself to where the issues of homeless and mental status are in the states more so. All through we have our own concerns here for the homeless and rise of mental health and this week it is homeless week awareness.

Estevez leads the role of managing a level in a public library in the town of Cincinnati and is compassionate to the needs of the homeless people who by day use the library for them to use computers, read, and general zone to stay out of the cold and have shelter by day.

A homeless death stirs concerns as to extra cold weather night the city is experiencing and for a large group of misfits there is nowhere for them to stay in community houses as they are overloaded. With 100 strong who do not want to be another victim to the death of cold on outside forces, they come to plea to use the library for the night to shelter themselves and in support is the Manger of the library and they end up taking a stand to stay and lock themselves in.

The Public sure has a lot of messages to carry and is one of those films that gives you lots to think of as to the homeless. The casting of all the characters are well placed, and it was stated by Alec Baldwin when Emilio calls you say I’m in who plays the negotiator and a parent who has a son that is a victim. There were also real homeless people given parts in the film as extras and received paychecks and food.
It is a real story and for Emilio a feeling of satisfying an audience in cinema to connect with this issue is his aim. It sure touched me and alerts me to this growing human race that is on the outside.

Runs in cinemas till AUGUST 12TH.