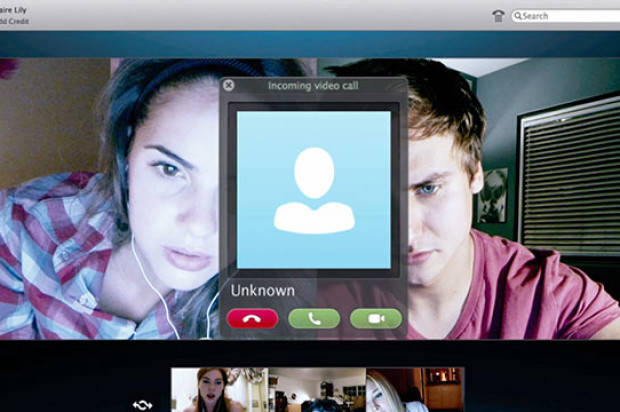 With bullying amongst teenagers now no longer confined to the halls of high school, ‘Unfriended’ arrives in theatres at the most relevant of times as social media sites such as Facebook, YouTube and Twitter allow the abuse to continue online. It’s not uncommon nowadays to read stories of teens committing suicide over the vicious tirades they can unfortunately experience at the hands of their peers, and with cyber-bullying one such act that seems more difficult to monitor, and punish accordingly, those responsible don’t seem to suffer as dire consequences as they should.

The idea of a whole film playing out through the use of a Skype message screen is a novel one, and ‘Unfriended’ uses this tool of communication to the best of its ability for a surprisingly effective horror film that mixes the supernatural with a topic its target audience are most likely all too familiar with. It’s nowhere near as contrived as you might think, and the cameos from other popular websites like Facebook, Spotify and Google add a relevance that help the overall experience feel slightly more relatable. A careless, spur-of-the-moment decision by an unknown assailant to post a humiliating video of one of their peers is at the centre of ‘Unfriended’, and sadly it has resulted in a suicide. The victim is Laura Barns (Heather Sossaman) whose subsequent suicide video similarly went viral, and now, one year on from her death, a group of her so-called friends are experiencing her wrath.

Laura’s supposed bestie Blaire (Shelley Hennig), her devoted boyfriend Mitch (Moses Storm), and their quartet of friends Jess (Renee Olstead), Ken (Jacob Wysocki), Adam (Will Peltz), and Val (Courtney Halverson) are enjoying a harmless group chat on Skype before they realise their conversation is being hijacked by a user identifying themselves as Laura. Initially palming it off as a sick prank, it doesn’t take long for the situation to escalate with our chat partners gradually showing their true colours in the lead up to “Laura” finding out which one is responsible for posting the initial video that began her downfall. As we sit through choppy connection footage and pixilated Skype screens (an admittedly effective touch), and suffer through naturalistic teen lingo (lots of “likes” and tantrums), ‘Unfriended’ runs the risk of coming undone before it’s had time to gain traction as the teens involved are positively despicable people, and garnering any emotional investment in them is near impossible. Thankfully though that seems to be intentional, and ‘Unfriended’ plays with us as we actively root against them; the film ultimately escalates to a game of “Never Have I Ever” which certifies just how nasty these people are.

The film is relatively light on gore so horror fiends may be underwhelmed, but every so often the film showcases a brief moment of disgust to keep us in check – without giving anything away I will say “Laura” has an interesting way of using a blender – and the issue of why don’t they simply just turn their computers off is addressed early on, so props should go to screenwriter Nelson Greaves for bypassing that potential plot-point. ‘Unfriended’ isn’t a pleasant film by any means, as a horror film it’s mildly effective, but it’s surprisingly strong in its commentary on bullying in the social media atmosphere, helping to highlight the sad victimisation behind cowardly comments. A supernatural horror film with a message? Who’d have thought!