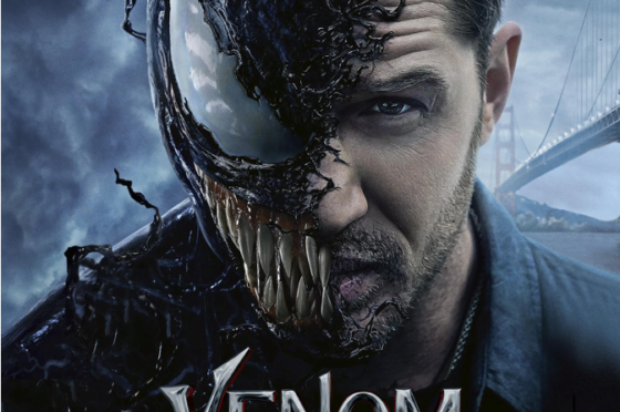 When a prize winning head strong reporter Eddie Brock ( Tom Hardy) steals secrets from his lawyer girlfriend’s computer about charges against a megalomaniac Life Foundation scientific and tech entrepreneur you know things are not going to go well. In an interview he questions him about disappearing homeless people he is using for his experiments that end up dead on rubbish heaps. This causes Brock to lose his Job and Girlfriend and becomes a down and out loser. Months later he is approached by a Life Foundation Scientist who is willing to get him into the Life foundation to show him the experiments where he spots a homeless friend and in an attempt to release her ends up as a Symbiotic host for the alien( Venom).

The action moves along at fast pace with some great chase scenes the movie starts off with a darker tone but moves into a more comic level due to the dialogue between Brock and Venom which is really enjoyably irreverent. Seeing a movie set in San Francisco the cars and bikes flying through the air down the street was reminiscent of the old Bronson movies in the 70’s.

Venom was a fun roller-coaster ride with big teeth. That being said there are some big holes in the story and a few times I was left wondering what happened to some characters and why didn’t this or that happen at certain times. I didn’t dwell on the inconsistencies and gaps in the storyline though some people may find this distracting.

Tom Hardy was a treat to watch as always Michelle Williams didn’t get a lot of room to play her part which was a bit of shame as she’s such a talent. It’s been reported that when Tom Hardy asked what his favourite part of the movie was he claimed it was scenes that didn’t even make the final cut which has led some to believe that dramtic edits may have contributed to the continuity issues .

This movie has appeal and is more fun and less dark than people were expecting and maybe that was a missed opportunity but I would not dismiss it just because it’s not what people expected.