The GC Indie Film TV Network will be presenting August 21st   film feature “Bad Karma” that was made last year 2012  by Limelight International Production filmed on the Gold Coast and directed by English director Suri Krishnamma.

The film is based on near-death experience forces a con man to come to terms with his shady past. The lead actor was Ray Liotta, and Dominic Purcell who stared in Prison Break  TV series.

This will be a great screening for everyone to see this film at the Basement of the Arts Centre but specially for Film industry folks to later to be able to meet and hear a hosted QA with Producer Pam Collis’s of Limelight, and Nino Martinetti, who was the Director of Photography.  Caroline Russo founder of GCIFTN shall be again hosting the night and is very excited to have secured Pam and Nino who are two very experienced and respected industry professional film workers. It is with delight that we may also link in with the director Suri Krishnamma with a Skpye link  to again be part of the Q&A.

Pam Collis’s overseeing that fact that she started in 1990 when she combined her analytical and scientific skills with the vision and artistry of producing and managing TVCs, Corporates and documentaries nationally across Australia.

In 1993, Pam took on the position of Sales Manager at Videolab – the premier Post Production facility in Brisbane, Australia at the time -, developing and finetuning her skills for production and post production in film (16mm, super 16mm, 35mm), digital intermediate and digital video high definition formats.

Pam continued her career working with Pictures in Paradise producers Chris Brown and Chris Fitchett, and was credited as Associate Producer of the critically acclaimed Australian feature film ‘The Proposition’, winner of Best Film at the 2005 IF Awards.

She followed this up as Line Producer and Post Production supervisor of the 2006 IF and AFI nominated feature ‘48 Shades’ and was Associate Producer of the chilling 2007 teen thriller ‘Acolytes’, another critically acclaimed Australian independent feature.

In late 2007, she Line Produced three feature films for the American Sci-fi market ‘Goblin Shark Attack’ (formerly Malibu Shark), ‘Beauty and the Beast’(2009) and Sinbad and the Minotaur (2010), followed by ‘K–9’, Stewart-Wall’s exciting 2009 sci-fi series about a robot dog.

2011 also saw Pam’s transition to Independent producing with her attendance at international film markets such as Festival de Cannes in May and the American Film Market (AFM) Los Angeles in Oct-Nov, setting up and cementing various producing partnerships. She joined the Producing team of Odyssey Film Studios Australia, with Paul O’Kane, partnering with Odyssey Media Inc. Currently they have two films in preparation for filming in Australia. Hard Drive starring John Cusack and Gun Monkeys starring Nicholas Cage. 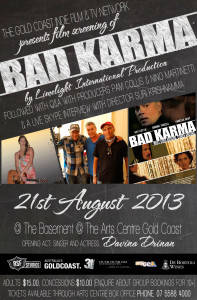 Nino, who is well-known for his outstanding work on the film “Molokai”-The Story of Father Damien, directed by Paul Cox, and winner of an Australian Film Institute Best Cinematography Award for the feature film Exile directed by Paul Cox, will talk about his experience using digital photography for the film Bad Karma starring internationally acclaimed actor Ray Liotta and Dominic Purcell.

To open up the night with our entertainment side is Singer and actress Davina Drinan  who as Gold Coast Musician, has passion for the ocean and surfing permeates her melodies and lyrics. Through her music she shares this love with her audience and raises their spirits as she takes them for a ride on a beautiful wave. Designed to inspire love for each other and the planet, her music is original and heartfelt, and splashes deep within. Davina’s music is a unique blend of folk, blues, reggae and pop inspired by Tracy Chapman, Jack Johnson and Lauryn Hill.

The Gold Coast Indie Film and Televison Network is brought to you by Caroline Russo Media and Promotions and proudly sponsored by Business Gold Coast incentive of the Gold Coast City Council. The GCIFTN would also like to thank De Bortoli Wines, Rachel Ford Studios , mygc.com and our own entertainment site Hush Hush biz. Finally we would like to thank the Arts Centre Gold Coast for their continued support and association with our event.