ROCK THE KASBAH is the story of Richie Vance, a has-been rock manager who takes his last remaining client on a USO tour of Afghanistan. When Richie finds himself in Kabul, abandoned, penniless and without his passport, he discovers a young girl with an extraordinary voice and manages her through Afghanistan’s version of “American Idol,” the wildly popular “Afghan Star.” From acclaimed director Barry Levinson (Good Morning Vietnam, Rain Man) and starring Bill Murray, Kate Hudson, Zooey Deschanel, Danny McBride, Scott Caan and Bruce Willis, this film releases on November 5, 2015. 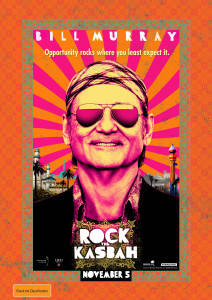