GEORGE CLOONEY IN REMAKE OF CATCH 22 ON STAN 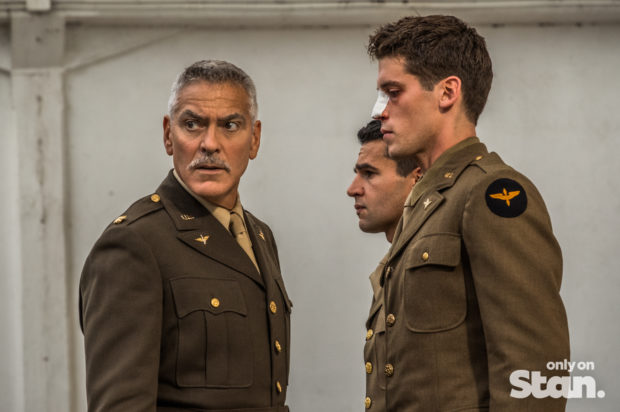 Stan has today announced that the hotly anticipated six-part event series CATCH-22 will come exclusively to Stan in Australia with all six episodes available Saturday May 18.

Based on the celebrated novel of the same name written by Joseph Heller, CATCH-22 is executive produced and directed by Academy Award® and Golden Globe® winner George Clooney (Up in the Air, The Ides of March) who will also co-star. Clooney will be joined by Christopher Abbott (“The Sinner,” First Man), Emmy® winner Kyle Chandler (The Wolf of Wall Street, “Bloodline”), Golden Globe® winner Hugh Laurie (“The Night Manager”) and Academy Award® nominee Giancarlo Giannini (Quantum of Solace, Casino Royale).

CATCH-22 is the story of the incomparable, artful dodger, Yossarian (Abbott), a US Air Force bombardier in World War II who is furious because thousands of people he has never met are trying to kill him. But his real problem is not the enemy, but rather his own army which keeps increasing the number of missions the men must fly to complete their service. Yet if Yossarian makes any attempt to avoid his military assignments, he’ll be in violation of Catch-22, a hilariously sinister bureaucratic rule which specifies that a concern for one’s own safety in the face of dangers which are real and immediate is the process of a rational mind; a man is considered insane if he willingly continues to fly dangerous combat missions, but a request to be removed from duty is evidence of sanity and therefore makes him ineligible to be relieved from duty.

CATCH-22 has been adapted as a six-episode, hour-long limited drama series from Paramount Television, Anonymous Content, George Clooney and Grant Heslov. CATCH-22 is executive produced by George Clooney and Grant Heslov (Argo) on behalf of Smokehouse Pictures, along with Richard Brown (“True Detective”) and Steve Golin (Spotlight) on behalf of Anonymous Content. Luke Davies (Lion) and David Michôd (Animal Kingdom) are co-writers and executive producers for the series. Ellen Kuras (Eternal Sunshine of the Spotless Mind) serves as producer and will direct two episodes. Clooney and Heslov will also each direct two episodes.

CATCH-22 will come to Stan as part of a new licensing deal with Paramount Worldwide Television Licensing & Distribution.
CATCH-22 will premiere exclusively on Stan in Australia with all six eps available on Saturday May 18.