GERMAN FILM FESTIVAL AUSTRALIA Germany PALACE CINEMA FESTIVALS by Caroline Russo | on May 25, 2018 | 0 comments | in Film Festival | Like it 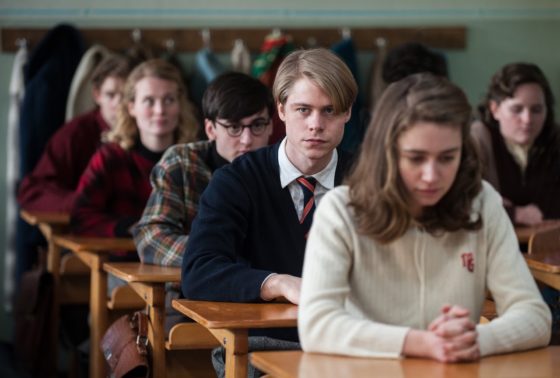 The German Film Festival will light up screens at Palace Cinemas across Melbourne, Sydney, Brisbane, Canberra and Adelaide from 22 May. The program of 32 Australian premieres represents the strong and vital cinema from one of Europe’s most prolific filmmaking nations, in collaboration with German Films and Goethe-Institut.

The opening selection, THE SILENT REVOLUTION, from acclaimed director Lars Kraume (The People vs. Fritz Bauer) is based on the 1956 true events in which a group of East German high school students stage a silent protest in class with far-reaching consequences.
Closing the festival two weeks later, is the new digitally restored version of WINGS OF DESIRE. Straight from the 2018 Berlinale the Wim Wenders’ 1987 drama follows two angels perched high above Berlin who listen to the thoughts of the mortals below. Don’t miss a visionary classic of German cinema on the big screen.

The CONTEMPORARY SELECTION houses 15 films straight from the international festival circuit and the cinema screens of Europe, including: GUTLAND, an atmospheric mystery starring Vicky Krieps (Phantom Thread) and Frederic Lau (Victoria) about an outsider who arrives to a small Luxemburg town that is hiding a dark secret; HEART OF STONE, a dark fairy-tale set in a rural community in the Black Forest where a poor charcoal burner makes a terrible deal in order to marry his beloved; THE FINAL JOURNEY, a gripping drama which follows a 92-year-old former German Army officer as he searches for the woman he loved long ago; based on a semi-autobiographical novel by Elisabeth Escher is HANNA’S SLEEPING DOGS, about a 9-year-old girl in a 1960s provincial Austrian town who discovers she is Jewish; and set against the turbulent backdrop of the current European border crisis WHEN PAUL CAME OVER THE SEA sees documentarian Jakob Preuss following migrant Paul Nkamani’s inexhaustible flight to freedom from Cameroon to Berlin.

Also sitting in the CONTEMPORARY SELECTION are some lighter and more humorous offerings. Nominated for the Crystal Bear at the Berlin International Film Festival, 303 is a story of young romance which follows two university students on a road trip across Europe; the recent box office hit in Germany A JAR FULL OF LIFE is an uplifting comedy that stars Jella Haase as a directionless young woman who is given an empty jar and told to fill it with adventures; a birthday gathering is memorable for all the wrong reasons in historical tragicomedy IN TIMES OF FADING LIGHT. There is also the witty dark comedy ARTHUR & CLAIRE in which two people form a life-changing friendship after a chance encounter; MY BROTHER SIMPLE, a touching drama based on the French bestseller; and in Niels Laupert’s intimate romantic drama WHATEVER HAPPENS after weeks of avoiding one another, separated couple Hannah and Julian must spend New Year’s Eve painting their shared apartment.

Plus don’t miss the tongue-in-cheek smash-hit comedy trilogy FACK JU GÖHTE 1, 2 and 3 w
Other highlights include: MADEMOISELLE PARADIS, an enthralling account of the life of a blind pianist whose partially restored sight witnessed a loss in her musicality; THREE PEAKS, a superbly crafted and utterly gripping drama starring Bérénice Bejo and Alexander Fehling about a seemingly idyllic family on holiday in the Italian Dolomites; biopic PAULA about pioneering female painter Paula Modersohn- Becker; and thriller FOUR HANDS, about two sisters who grow up haunted by a terrible crime they witness.

The festival also features a short film program, SHORT EXPORT 2018 which presents a vast artistic and stylistic variety of films from the German short film scene. In its 13th year it features six short films ranging from bizarre and exciting to warm-hearted and hilarious stories, featuring fiction, documentary and animated films.

KINO FOR KIDS presented by the Goethe-Institut continues the great tradition of promoting the German language to young audiences. The program of six films are school and family-friendly, including: NOT WITHOUT US!, a thought-provoking documentary that follows seven children from five continents as they travel to school, showing how their worlds might be different but they still have much in common; LOTTE & LUISE TWINS ON BOARD, a modern re-telling of Erich Kästner’s classic novel (made famous by The Parent Trap); ROCK MY HEART, the uplifting film about a 17-year-old who has a congenital heart defect; ROBBY & TOBY’S FANTASTIC VOYAGER in which Toby, an 11-year-old inventor and his best friend Robby, an alien robot, embark on a grand adventure in their fantastic voyager to find Robby’s parents; AT EYE LEVEL which sees a 11 year old who meets his long-lost father for the first time; and based on the best-selling parenting book TEENOSAURUS REX, in which a stay-at- home father (Jan Josef Liefers) finds himself in over his head when his daughter turns into a pubescent nightmare just before her 14th birthday.