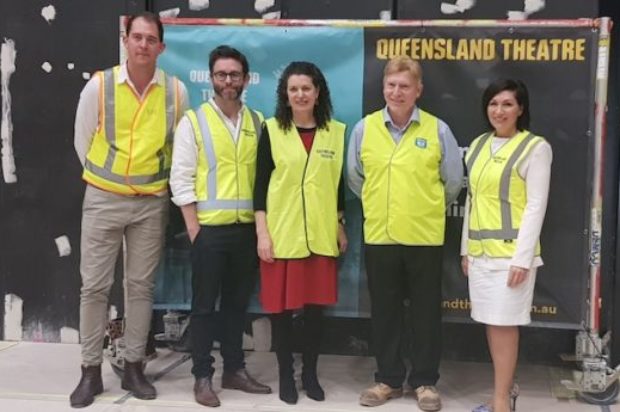 A newly refurbished venue for Queensland Theatre will deliver benefits for the state’s arts sector and provide an enhanced audience experience when it opens in October.

Minister for the Arts Leeanne Enoch has today inspected construction of the redevelopment of the Bille Brown Theatre, which the Palaszczuk Government has invested $2 million towards.

“The redevelopment of this amazing theatre will help Queensland Theatre stay at the top of their game and allow them to continue presenting fantastic productions that audiences love,” Ms Enoch said.

“The upgraded theatre will open its doors in South Brisbane in October, with Queensland playwright David Williamson’s latest play, Nearer the Gods.

“The Bille Brown Theatre in South Brisbane, which started out as a studio space and rehearsal room, has proven to be a hardworking and versatile space for Queensland Theatre, hosting workshops, rehearsals and performances.

“The refurbishment will take the space to the next level by increasing the seating capacity from 228 to 351, upgrading the amenities and improving disability access.”

Minister Enoch said the upgraded venue would give Queensland Theatre additional capacity to take a leadership role in collaborating with Queensland’s artists and smaller companies.

“Audiences have embraced new landmark Queensland Theatre productions such as musical Ladies in Black; the Torres Strait Islander theatre work My Name is Jimi; and The Longest Minute, a collaboration between Queensland Theatre, Cairns-based JUTE Theatre and Brisbane-based debase productions.

“The redevelopment of Bille Brown will allow Queensland Theatre to continue to invest in exciting new work, reach new audiences and partner with other creatives.”

“The Bille Brown Theatre is a once in a generation transformation for Queensland Theatre. It’s a rare opportunity to build the ideal theatre experience from the ground up,” Mr Strong said.

“This is why we have invested in this project, and why our Government will continue to support creative spaces of all sizes, from the intimate to bigger venues that can accommodate large scale productions.

“The redeveloped Bille Brown Theatre is a win for the arts sector and follows on from the $2.3 million redevelopment of the Cremorne Theatre at QPAC, which opened last year.

“It also adds to the Palaszczuk Government’s commitment of $125 million over four years for a new $150 million theatre at QPAC, and $8 million in matched funding towards the $35 million redevelopment of the Thomas Dixon Centre in West End, home to Queensland Ballet.”