Hit 105 M RADIO BRISBANE radio jock in BRIZ radio tripple the barricks by Caroline Russo | on June 11, 2019 | 0 comments | in Entertainment | Like it 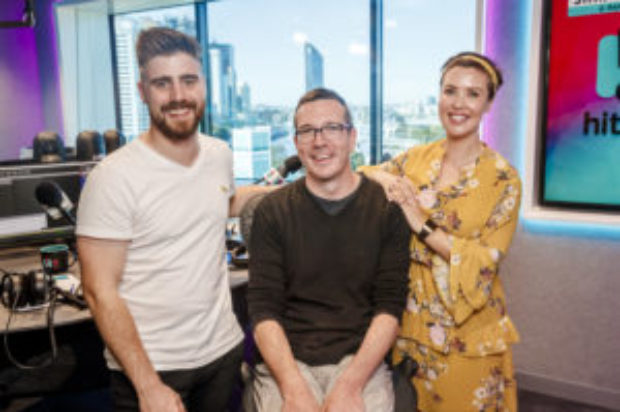 Brisbane’s HIT105 and Triple M began have begun broadcasting from their new custom-designed headquarters AUDIO HQ, the country’s most advanced radio super studios.
After more than 12 months in planning, Southern Cross Austereo (SCA) Brisbane, parent to the two stations which collectively command one million listeners in Brisbane every week, yesterday the stations officially left their long-time home at North Quay, and relocated to Level 4 at The Barracks. It was one of the biggest and most technical relocations in radio history in Australia.

Two fully operational and broadcasting radio stations made the mammoth move – 125 team members – with no break in transmission, while behind-the-scenes the company has created a cutting-edge new headquarters with direct input from every employee.

The new headquarters are one of the most technologically advanced radio facilities ever built, with:
· 50km of CAT6A data cabling!

· and the largest electrical switchboard in SCA history!

Under the direction of SCA Executive General Manager Queensland Damon Rielly, Brisbane-based Jane McConnell Interior Design managed the design and Mettle project-managed the huge build and construct project, with every team member able to be a part of the process.

ABOUT PETRIE TERRACE AND THE BARRACKS SITE
The area has quite the colourful past! In 1860, there were no cars, no electricity, definitely no Google and radio wasn’t a thing. Petrie Terrace wasn’t a suburb yet, but it was home to Brisbane’s first gaol, a hulking grey building with an imposing arch. There was a cemetery close by, right near what is now Suncorp Stadium.

Fast forward about 20 years – the gaol was closed, and the area was nabbed by the local Defence Force and the Police as a training ground and Depot, complete with stables for many years. During World War II, it became the centre for radio operations and in the 1970s was converted to the police headquarters. (FYI, The Saints converted the timber cottage across the road into “Club 76” where they performed nightly and clashed with their police friends over the road!). By the 1990s the famous Underground Nightclub dominated – it was the era of Beverley Hills 90210 and Melrose Place, which made for epic live TV events. And now, after another hiatus, the site is alive again, a centre once more for history to be made.

# ELEVEN. For The People. Designer Jane McConnell said she had never worked with a client who pushed so hard to ensure such forward-visioning in terms of space usage, technology and prediction of staff needs to create a work environment they call home. AUDIO HQ is a truly unique place, for the people, by the people.

# TEN. 24 Hours a Day, Every Day. The thing about AUDIO HQ is that some people start at 4am (that’d be the news teams), some start at 5am (the brekkie teams) and some start at 10pm (hello mid-dawners). There’s also the 9am to 5pm teams. Therefore, the design of AUDIO HQ had to be about BALANCE – making sure the workplaces, End-Of-Trip facilities and common areas are as welcoming and inspiring at midnight, as they are at midday; making sure there were environments for hard thinking, collaborative works, chilling, meetings and more. Being open and on air 24/7 was a unique element of the design brief.

# NINE. The Future of Audio on the Walls. Don’t just listen, look! AUDIO HQ is now home to three exclusive artworks, created by famed contemporary fine artist, Brisbane’s Matt Stewart. Working to a brief from SCA, Matt customised his interpretation of the future of audio and created the artwork direct to the three walls.

# EIGHT. The Most Queensland Rooftop of them ALL! There’s a lots of talk about corporate rooftop entertaining spaces. But no-one has a dedicated corporate entertaining space like this – AUDIO HQ’s looks straight down the legendary Caxton Street to Suncorp Stadium, out over the Toowong reach to Mt Coot-Tha, and to the west past the iconic Red Hill church. Sunsets are glorious. Sunrises are epic. It does not get any more Brisbane or Queensland.

# SEVEN. The Audio Pod – this velvet circular bench in reception is the go-to place for visitors to listen to their favourite podcast, live radio or music, using the best acoustics possible. The design was inspired by a 1950s vinyl record listening station.

# SIX. The Sonic Boom Room. This is a unique and dedicated space where clients can be taken to listen to content that’s been developed for them, where artists can listen to their tracks. It is a custom-designed, acoustically balanced, immersive experience, that sets AUDIO HQ completely apart.

# FIVE. Future Proofed – The Workplace of the Future. Design and the technology have merged to future-proof each other at AUDIO HQ, now a shining example of the future of sound and light! All screens and lights are programmable and entirely nimble, making static, permanent signage a thing of the past. At AUDIO HQ, wholly branded environments can be created easily and immediately. The layout of all areas is interchangeable from meeting to chill areas, able to accommodate all workplace needs. It feels like home, but better.

# FOUR. The Collaborative Approach – We Did It. Under the direction of SCA Executive General Manager Queensland Damon Rielly, all staff have had a voice in the design of AUDIO HQ. Twelve staff made up the design working group, representing all areas of the business. They met with their respective teams to uncover what they would like to see, what annoyed them about the former building, what they love, what they hate, what they are passionate about (turns out it’s microwaves) and then presented to the designer. Every step of the way the working group was involved – right through to buying trips to Living Edge, Space and Stylecraft.

# THREE. The Staff Café – worthy of a chef’s hat! The stunning green marbled stone bench is the first sign this is no ordinary staff area. The La Marzocco coffee machine is the second! More Queensland bistro, than any staff area, the Staff Café at Audio HQ is a direct reflection of the huge investment SCA makes in their staff. Any other company would have hidden the Staff Café out the back and made it totally utilitarian – at SCA, it’s in the heart of the building, the premium spot, and it is five star. (PS. the unique stone was quarried from a mountain in China, shipped to northern Italy for cutting and polishing and then shipped to Brisbane.

# TWO. Eyes (and ears) on Brisbane. The on-air teams that talk to Brisbane every day and night, now look at directly Brisbane. The views from the studios look out over the mighty Brisbane River, across the city and South Bank to the southern reaches of South East Queensland. See # EIGHT for the views from The Cauldron. HIT105 and Triple M can now truly see the city they call home.

# ONE. The Transformation – The Future of Audio. AUDIO HQ stands as the most advanced studios in the country. The new headquarters features 50km of CAT6A data cabling, 32,000 unique Audio Signals (that’s a lot of chatter), 101 TV screens (wow, just wow), 318 computer screens, 6144 channels of lighting control and the largest electrical switchboard in SCA history! If Australia ever wants to put someone on the moon, the SCA Technology Team is the crew to do it. In the meantime, listen to the future of audio on HIT105, Triple M or PodCast One!