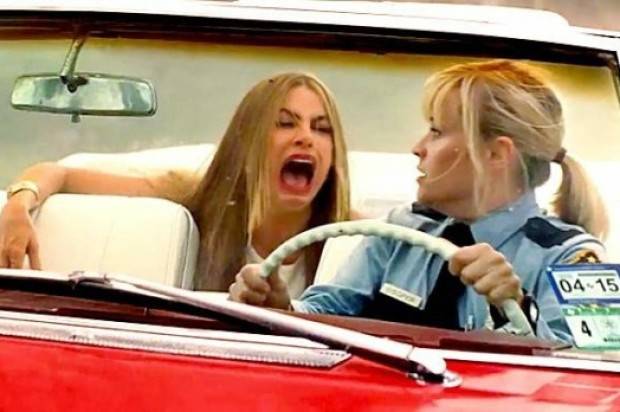 Just as Reese Witherspoon takes a giant step forward in her career with her Oscar nominated turn in ‘Wild’ following a string of forgettable cinematic outings, she leaps two steps backwards in ‘Hot Pursuit’, a clichéd and formulaic road-comedy romp that presents the actress with the kind of material she has far outgrown. As a producer on this Witherspoon should’ve had the sense to bypass such a tired film that doesn’t even allow her to work with the lightest character, instead she’s stuck as an uptight cop who follows protocol like it’s a religion, wears unflattering diaper-like underwear and sports the most uptight of attitudes. Her cohort Sofia Vergara fares a little better as she hams it up accordingly every moment she’s on screen; though it isn’t hard to argue that the creators of this film have simply asked her to redo what she does on TV’s ‘Modern Family’ – just amp it up to 11!

Director Anne Fletcher is no stranger to this kind of material with ’27 Dresses’, ‘The Proposal’ and ‘The Guilt Trip’ on her resume (we’ll try not to hold that last one against her) so the film at least looks good, and it goes without saying that Vergara and Witherspoon are photogenic enough that ‘Hot Pursuit’ can’t damage them too severely; it does its best though with the latter dressing up as Justin Bieber to gain entrance to a party which is hopefully the lowest she’ll sink on screen. The plot itself is all very been-there-done-that with Witherspoon’s officer Cooper assigned to escort Daniella Riva (Vergara), the wife of a drug boss, into protective custody as she prepares to testify in a case against a cartel leader. Obviously gunmen and crooked cops have other plans for the two and a chase ensues as Cooper and Daniella try to outwit those attempting to take them down, while also clearing their names in the process when it’s believed Cooper has taken Daniella hostage.

The film stretches its material to the point of breaking throughout but sporadically there’s a few genuine chuckles on hand with the running gag on Cooper’s decreasing height and Daniella’s increasing age good for a smirk or two (despite the fact Vergara looks 35-years-old at the most), a getaway tactic involving the two dressing up like a deer and, as cringe-inducing as it is, a clinical breakdown on menstruation; Vergara’s follow-up line to this description is particularly well executed. Slapstick tends to be the direction ‘Hot Pursuit’ veers its comedic cycle towards, and, sadly, there’s just very little imagination to it all. A subplot involving Cooper’s unlikely romance with a convicted felon (Robert Kazinsky) is surprisingly well handled though, and it’s evident with their moments together that Witherspoon is more at ease with material that’s a little more grounded.

Overall ‘Hot Pursuit’ isn’t flat-out terrible, it’s more just average and disappointing given the proven comedic prowess of its leads, and though Witherspoon and Vergara are likely to escape this unscathed, director Anne Fletcher might want to think about digging her way out of the pigeonhole she’s been slumming in for the last few years as this won’t be doing her any favours.