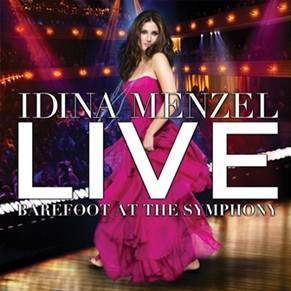 Idina Menzel has a diverse career on the stage, in film, television and in music.  The beloved Broadway star, best known for her work in the Broadway musical and film adaption of Rent, her Tony Award-winning performance as Elphaba, the green-faced Wicked Witch of the West inWicked and her recurring role in the hit TV series Glee, has spent much of the past two years headlining concerts with world-renowned symphony orchestras.

Idina Menzel Live: Barefoot at the Symphony was recorded in Toronto, Canada at the Koerner Hall within the      Royal Conservatory of Music headquarters. Menzel performs with the 52-piece Kitchener-Waterloo Symphony, one of Canada’s premiere symphony orchestras, under the direction of legendary conductor Marvin Hamlisch (or as Menzel prefers to call him, the legendary Marvin Hamlisch) and her equally accomplished music director and pianist, Rob Mounsey (who has worked with everyone from Paul Simon and Steely Dan to Madonna, Usher and Rihanna). The special features Broadway numbers as well as imaginative reworkings of modern tunes such as Lady Gaga’s “Poker Face” and Sting’s “Roxanne.”

Though Menzel’s symphony concerts have attracted sellout crowds and earned consistent critical praise, she was hesitant about the idea at first. “I’ve toured a lot in my life with different bands and different styles of music, but I stayed away from orchestras and symphonies for a long time, because I like to have a real intimacy with the audience, and I was afraid these big orchestras would usurp my ability to do that. But then I discovered that there’s a way to work with 80 musicians and make it feel like we’ve all known each other for years. I’m still able to explore my edgier side with songs like ‘Roxanne,’ but do it with an orchestra, which is really thrilling.”

Menzel opens the set with “Life of the Party,” written by Andrew Lippa for his 2000 off-Broadway musical The Wild Party, which costarred Menzel and her husband, Taye Diggs. It was Menzel who came up with the clever idea of combining Cole Porter’s “Love for Sale” with Sting’s “Roxanne.” From Rent, the landmark musical that not only provided Menzel with her big professional break but also introduced her to Diggs, she chooses “No Day But Today.”

Between Broadway numbers, Menzel slips in Jimmy Webb’s “Asleep On the Wind” (recorded by Webb in 1974 for his album Land’s End).  Other standouts include Lady Gaga’s “Poker Face,” which she performed with Lea Michele on Glee and charged Mounsey with the challenge of coming up with a big, orchestral arrangement for it.  Mounsey also came up with a playful rendition of Rodgers and Hart’s “Where or When,” featuring a special guest, husband Taye

Diggs.   Making the guest appearance was, she says, “Entirely his idea. Once we’re on stage together it’s the real deal and we have great fun.”

Idina Menzel Live: Barefoot at the Symphony  album and DVD will be released through Concord Records in Australia on May 31st.

Idina will be bringing her beautiful performance to Australia in June.  Catch her on the following dates: