AUSTRALIAN JAZZ LEGEND - ALBAREANNOUNCES AUSTRALIAN APRIL and MAY Jazz tours by Caroline Russo | on April 17, 2013 | 0 comments | in Interviews | Like it 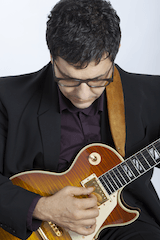 Jazz legend Albare to perform one night only in Brisbane

The performance is part of Albare’s national Albare iTD tour showcasing his current instrumental album release Long Way, which follows hot on the heels of a highly successful tour of Europe, the United States and Asia (2012).

The guitar virtuoso and composer continues to receive international acclaim for Long Way, which remained in the US top 50 jazz charts for 20 consecutive weeks late last year.

Light and melodic improvisations are the signature of Long Way that abounds with a multicultural blend provided by the world-class international mix of musicians that accompany him both on the album, and on the concert stage.

When asked what the inspiration was for Long Way, his first album produced by Matthias Winckelmann for the prestigious German jazz label Enja Records, Albare said it was a $100 question.

“Really, it’s a journey from beginning to end, “said Albare.

“For example what I did for the track Eagles Way was to meditate – go back to my childhood to find that space for inspiration that is most powerful.”

“All day long they were talking about man’s mission to get to the moon – about the Apollo and Soyuz space programs.”

“It was an exhilarating time to live!”

“Eagles Way is a tribute to that time and to man’s journey to the moon.”

If you listen closely to the beginning of the Eagles Way track you will hear a sample of the astronaut’s commentary on take-off on Apollo 11 in the background. This is followed by the historically famous quote ‘one small step for man, and one giant step for mankind’ at the end. 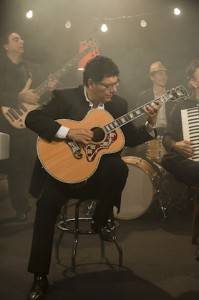 This was just one component of a composition Albare said when translated into music created a feeling of floating, as if you were in space.

The title track Long Way was the culmination of a theme that originated from asking what people thought about in terms of long ways (distances). After all it’s a long way to the moon!

What resulted was a series of melodious tunes that have created a concept with wide appeal for both jazz enthusiasts and music lovers in general.

The Long Way represents musical mastery, creating a platform for improvisation by musicians that inspire and entertain. This transpires on stage in a memorable performance that soothes the soul and lifts the spirits.

Albare’s one-night only concert at the Judith Wright Centre is a highlight of Brisbane’s 2013 jazz music calendar, an event not to be missed.

To book tickets for the event call 07 3872 9000 or visit judithwrightcentre.com.