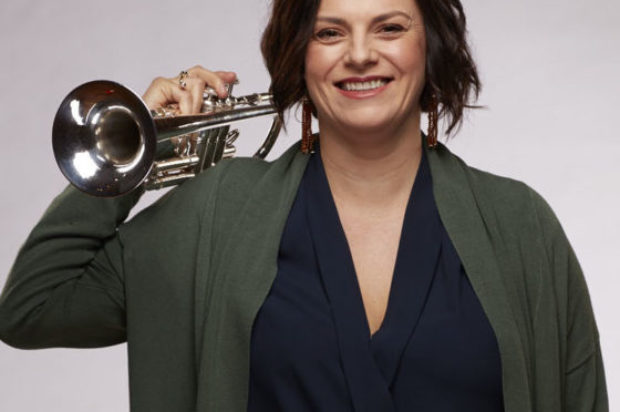 “I started with the flute, but my parents would get frustrated because I wasn’t that great at it. Then I played piano, but I didn’t practice, so that didn’t really work out either. When I asked to play trumpet Mum wasn’t too keen, so I had to play on a leaky trumpet for a few years at school. Eventually, I got a new one when it was obvious I was going to stick to it,” she said.

“In high school, I was a bit unreliable, I think I gave up at one point because I was into horse riding. But I decided in my late teens to really focus on trumpet and after this I went to London to audition for some schools and I won places at a couple.”

Butler spent 12 years in the UK and gained a Masters with Distinctions in performance at Trinity College of Music in London. She then freelanced with the biggest companies in the region – Royal Opera House Orchestra, English National Ballet, London Concert Orchestra, BBC Scottish Symphony, Scottish Opera, Royal Philharmonic Orchestra and the New Queens Hall Orchestra, before moving back to New Zealand in 2004 where she was appointed Associate Principal Trumpet with the Christchurch Symphony. She was then appointed Associate Principal Trumpet of the Auckland Philharmonia in mid-2009.

In late 2009, she moved to Australia, accepting the position of Principal Trumpet with the Queensland Symphony Orchestra – making history in the process.

“I don’t necessarily think the lack of female trumpet players and principals is a gender-specific issue; but I am proud of being the first appointed female Principal Trumpet in Australasia and am more than happy to encourage young women everywhere to pick up a trumpet and make sound,” she said.

She said finding an instrument that is a natural fit is important for students. “If a student is involved in music and finds an instrument that they love to play, and fits them well, then they will continue, even maybe forge a great career. Loving music but not being able to find your soul-instrument can turn so many people away from making it a lifelong partnership.”

What else about Sarah? She actually met her partner Malcolm Stewart at Queensland Symphony Orchestra (he is Principal French Horn) and they share four kids, a Kelpie Staffie cross called Charley who is in a constant state of training, and five chickens and live at Closeburn near Samford.

Sarah is a passionate educator. She is Trumpet Lecturer and co-head of Brass at the Queensland Conservatorium at Griffith University, seeing this as an important connection for the Orchestra – that so many Queensland Symphony Orchestra musicians are involved in teaching and passing on knowledge.

On what Sarah is looking forward to musically this year with the Orchestra – “The Maestro concert on June 9 features some fantastic trumpet parts thanks to Strauss, and the Maestro on August 4 features the Bartok Concerto for Orchestra which is fantastic as well. Performing music scores live to films is brilliant and we have upcoming the next Harry Potter movie and then in July, Star Wars!”